The long running feud between man and club broken down. 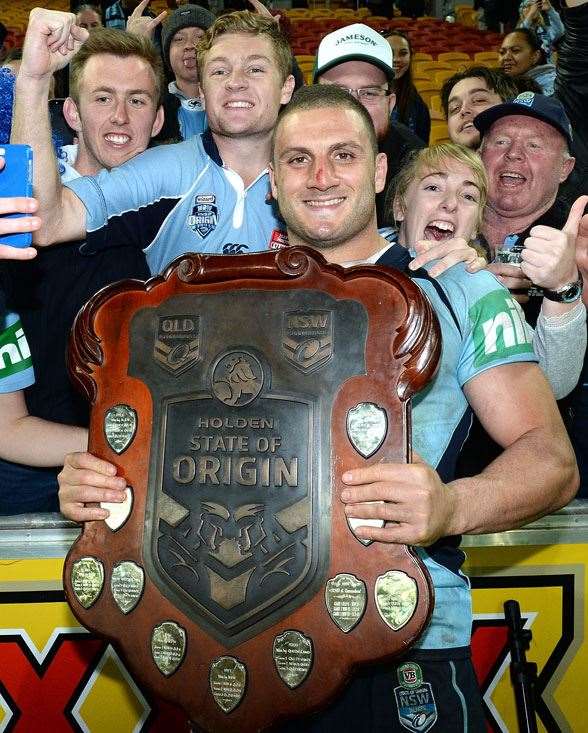 Robbie Farah has been banished to reserve grade and will find it very difficult to regain his place in the West Tigers NRL side after coach Jason Taylor labelled his Tigers side "better without Farah."

One can easily forget that at just 21 years old the NSW hooker, led the joint-venture club to their maiden NRL premiership or playing a pivotal role in the Blues snapping a nine year series deficit in 2014.  To many Tigers fans, Robbie will forever be remembered as a legend of the club but to the wider NRL community, Farah's legacy as one of the best hookers to ever lace a footy boot is being hampered by constant off-field drama.

So, we give to you ... The Robbie Farah Chronicles!!

In Round 13 of the 2003 NRL season, at just 19 years old Robbie Farah made his debut for the West Tigers coming off the bench against Manly at Leichhardt Oval in a 38-30 loss. Farah would go on to make another three appearances in his debut season earning praise from many League pundits.

An injury in 2004, would restrict Farah to making just three NRL appearances after suffering an injury which forced the Tigers youngster to undergo a knee reconstruction. 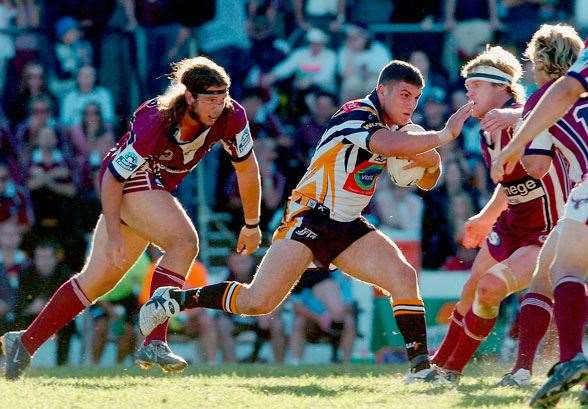 A fresh faced Farah during his early playing days. (Photo by Getty Images)

The season that all Tigers fans are still celebrating today. Although, Farah began the 2005 NRL season playing reserve grade and it wasn't until the Tigers were on the wrong side of some heavy losses that then Tigers coach Tim Sheens decided to put some faith in the youth. Farah was at the forefront of this revolution at the Tigers along with Benji Marshall, Bryce Gibbs, Chris Heighington and Liam Fulton as they came from out of no where to secure a top four berth and go onto make the 2005 decider.  Farah and the Tigers would face the North Queensland Cowboys with the Concord based side prevailing 30-16 delivering the merger club their maiden premiership. Farah was just 21 years old. 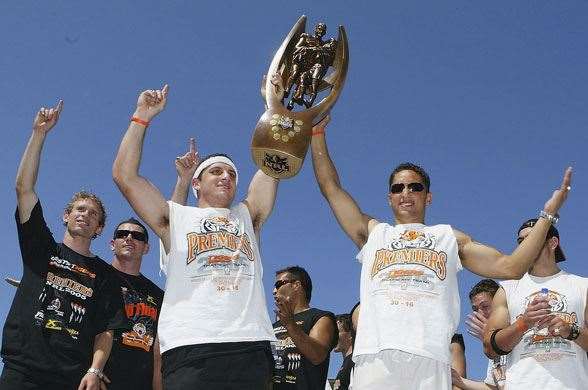 Farah and Benji Marshall celebrating the Tigers premiership in 2005. (Photo by Getty Images).

After a breakout season, Farah would earn a NSW City jumper and Prime Minister’s XIII selection the following year. Farah would go from strength to strength as the seasons progressed with many touting Farah as the heir apparent to the NSW Blues hooker jumper. He would fall an agonising one vote short of Johnathon Thurston in the 2007 Dally M awards but would be named Dally M Hooker of the year.

In 2009 Farah would make his debut in the State of Origin around the same time he spurned a lucrative contract offer from the Gold Coast Titans to become club captain of the West Tigers signing a long term contract. However, Farah’s series debut would be an unforgettable experience, playing only two of the three matches, being dropped for underwhelming and inconsistent performances for his state. Despite this, he would still go on to make his Australian debut at the end of season Four-Nations tournament earning praise as Cameron Smith’s understudy.

Farah would not be seen in a Blues jumper until the 2012 series, where he wasn’t even first choice. An injury to Danny Buderus and an outstanding man-of-the-match performance in the City-Country Origin ‘selection’ forced coach Ricky Stuarts hand to pick Farah. He would go on to play all three games in a series loss, earning the Brad Fitler Medal for the Blues player of the series. 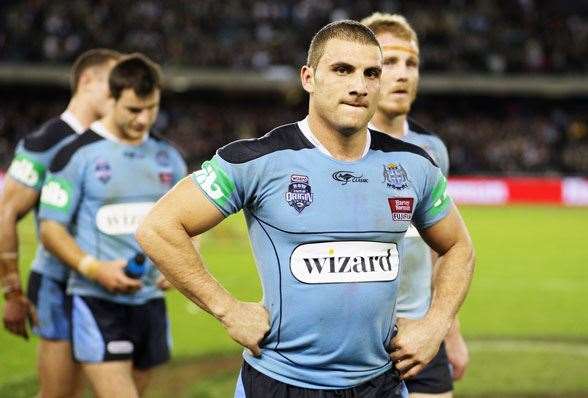 During his re-call to the Blues side in the 2012 series, personal off-field battles will would play havoc in Farah’s life. His mother was diagnosed and subsequently passed away due to pancreatic cancer just four days after he led the Blues to victory in Game II of the series.

Farah often recalls the story, of his mum giving him a piece of string that would be with Farah forever, which he wore during the Origin game, the last game Farah’s mother would see her son play.

At the start of the 2013 season, Farah would sign a new lucrative and heavily back-ended deal to stay with the Tigers until at least the 2017 season. This would be the beginning of the end of Farah and his relationship with the Tigers. He would go on to captain the Blues for the first time in the absence of Paul Gallen and bring up his 200th game. By the end of the 2013 season, Tigers coach Tim Sheens was sacked with many believing Farah was the forefront of his dismissal. 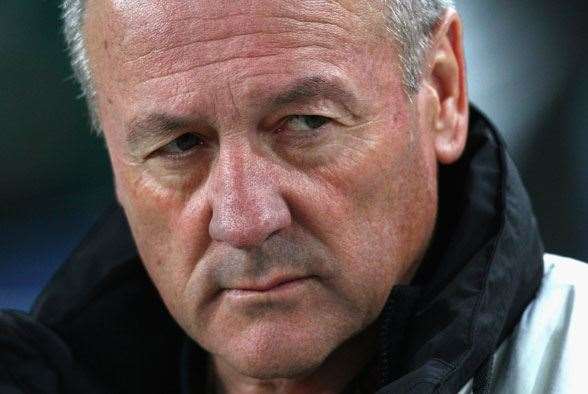 Tim Sheens was sacked from his Tigers role with Farah believed to have played a part in the decision. (Photo by Getty Images)

“Can’t Coach” but I can win a Origin Series

The feud would play out in the public eye with each accusing the other of telling fibs, however this feud would take a toll on Tigers coach Potter. It was the suggested Farah and Potter, after the comments made by Tallis could not see eye to eye leaving to much uncertainty on the future of both Tigers employees. Potter was ultimately fired, although Farrah has insisted he had nothing to do with his sacking.

Despite the off-field drama, Farah would help lead the Blues to a series win in Origin after nine years of Queensland dominance. 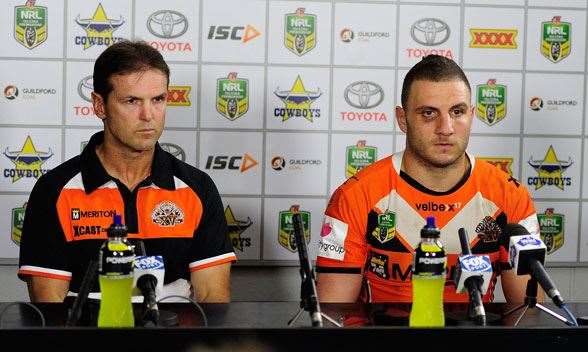 Mick Potter and Farah never had a great relationship. (Photo by Getty Images)

Jason Taylor was brought in by the Tigers board to ‘change the culture of the club and make the tough decisions.’ The biggest decision the former North Sydney Bears halfback would make come in August of 2015 when it was revealed Taylor informed Farah he was free to talk to talk to other clubs or stay and run the risk of being demoted to NSW Cup and train by himself or with a part-time squad. This placed massive strain on the relationship between captain and coach. However, Farah would solider on for his beloved West Tigers playing the rest of the season in first grade on the back of fantastic performances. Ultimately come seasons end, Farah would relinquish the captaincy of the West Tigers to youngster Aaron Woods.

After still being told during pre-season he was free to leave, Farah remained persistent in staying at the Tigers and would remain with the club. Despite the signing of Premiership winning hooker Matt Ballin from Manly, Farrah would remain first choice despite missing the first few games through injury. He would go on to play nine games and also played all three Origin encounters.

However, on July 20th 2016, West Tigers coach Jason Taylor kept his promise made in August of 2015 and demoted Farah to NSW Cup for the first time since 2005. 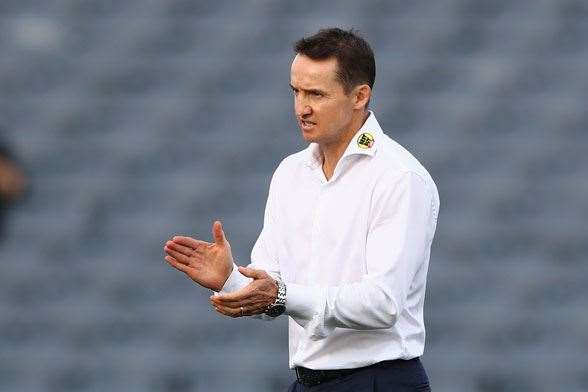