It’s hot outside … and it’s hot inside the pages of the February 2017 edition of Inside Sport magazine.

As Test cricket grows ever-more moribund, and the T20 version of the sport hurtles into an ill-defined future, we ask: is it time to redefine the entire notion of cricket?

In a great era of tennis, Stan Wawrinka has somehow remained under-appreciated. But don’t worry Stan fans: if he keeps winning Slams, and that will soon change.

Few cyclists race the clock better than Rohan Dennis – and fewer are as funny about it. Check out our feature story on the cheeky Aussie in this month’s issue.

Meanwhile, in a tale fit for the nation’s capital, the Brumbies in 2016 were the subject of all matter of machinations. Catch up with the Super franchise’s administrative horror story.

Our netballers have been preparing like professionals for a long time … now they’ll be paid like it. With the inaugural Suncorp Super Netball season almost upon us, we drop in on Giants Netball in the lead up to a truly historic year for netty. 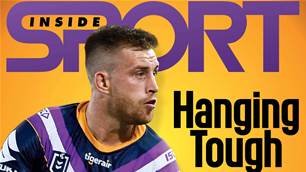 July 2019 edition of Inside Sport on sale now