At the weekend, I flew over to Adelaide to hang with my better half during her off-time. She was attending a weekend-long Indigenous conference. Somehow, I ended up at The Showdown.

Before I go on, this isn’t a piece about how, because I went and watched an AFL game, I’ve suddenly been converted from rugby league to rules. I’m sure that’s happened to people over time, and visa-versa from AFL to NRL, and across other sports, but not in this instance.

Anyway, a seat was on offer from a conference participator who is a leading AFL staffer. Big-time live sport? I’m in.

The Showdown is a very important game played between Adelaide’s two elite-level Aussie rules teams. (Oops, it’s branded as AFL now, isn’t it? I’ll stick to script). Both use the newly renovated Adelaide Oval as their home ground, but tonight Port Adelaide Power is hosting the Adelaide Crows. (The Crows won). You know a city the size of Adelaide has a kind of liking for a sport when over 53,000 people, mostly from one club, mind you, can fill a stadium. 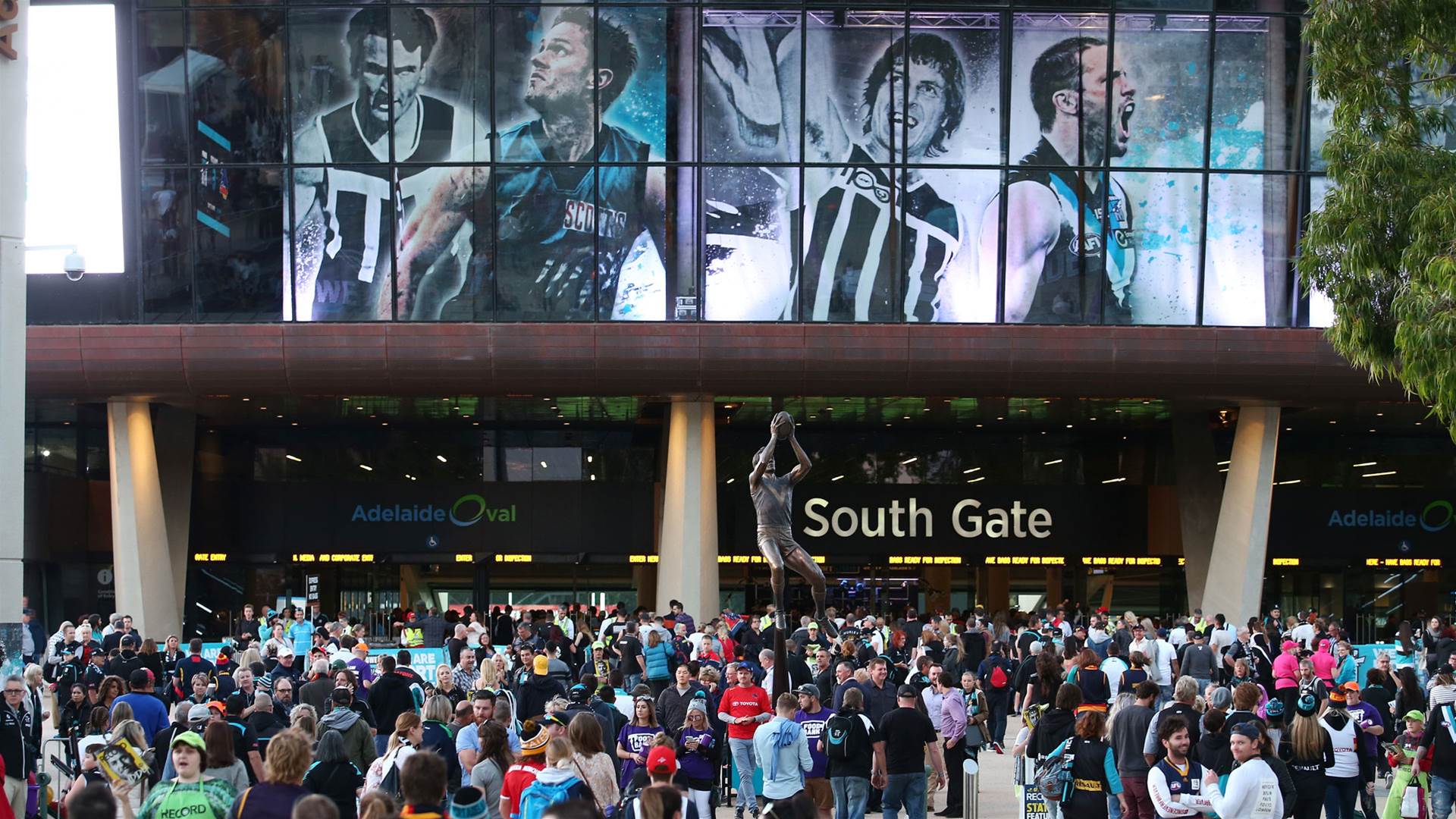 Because I left slightly before full-time in order to beat as many of those 53K out the doors as possible, I missed the brawl at the end of the game. I didn’t miss “never tear us apart” though. I have no opinion on this playing of a song before a game. It’s a bit like Canberra’s Viking Clap. Whatever.

The context paragraph: I grew up in the rugby league heartland of Penrith, then the Southern Highlands of NSW. When I was old enough to fly, I moved to Sydney; hardly an AFL hotbed. (I’ve heard plenty of stories about the sport supposedly taking over Sydney but I’m yet to see it.) So my experience with this sport over the 39 years of my existence leading up to tonight is very limited.

After some sightseeing, I had popped in to Barry’s Bar on Grenfell St in the city for a burger and chips at about 1.30pm (we ought to hit them up for some advertising after that mention). There were fans from both sides in there already lubricating themselves up for what promised to be a torrid encounter. So I could tell some shit was going to go down tonight.

Seated in section 310, Row V, seat 8, I watched on as the two teams clinically went about trying to work around, through and under their opponents. This flooding thing they talk about? It’s real. And really noticeable when watching a game live, and from up high-ish. 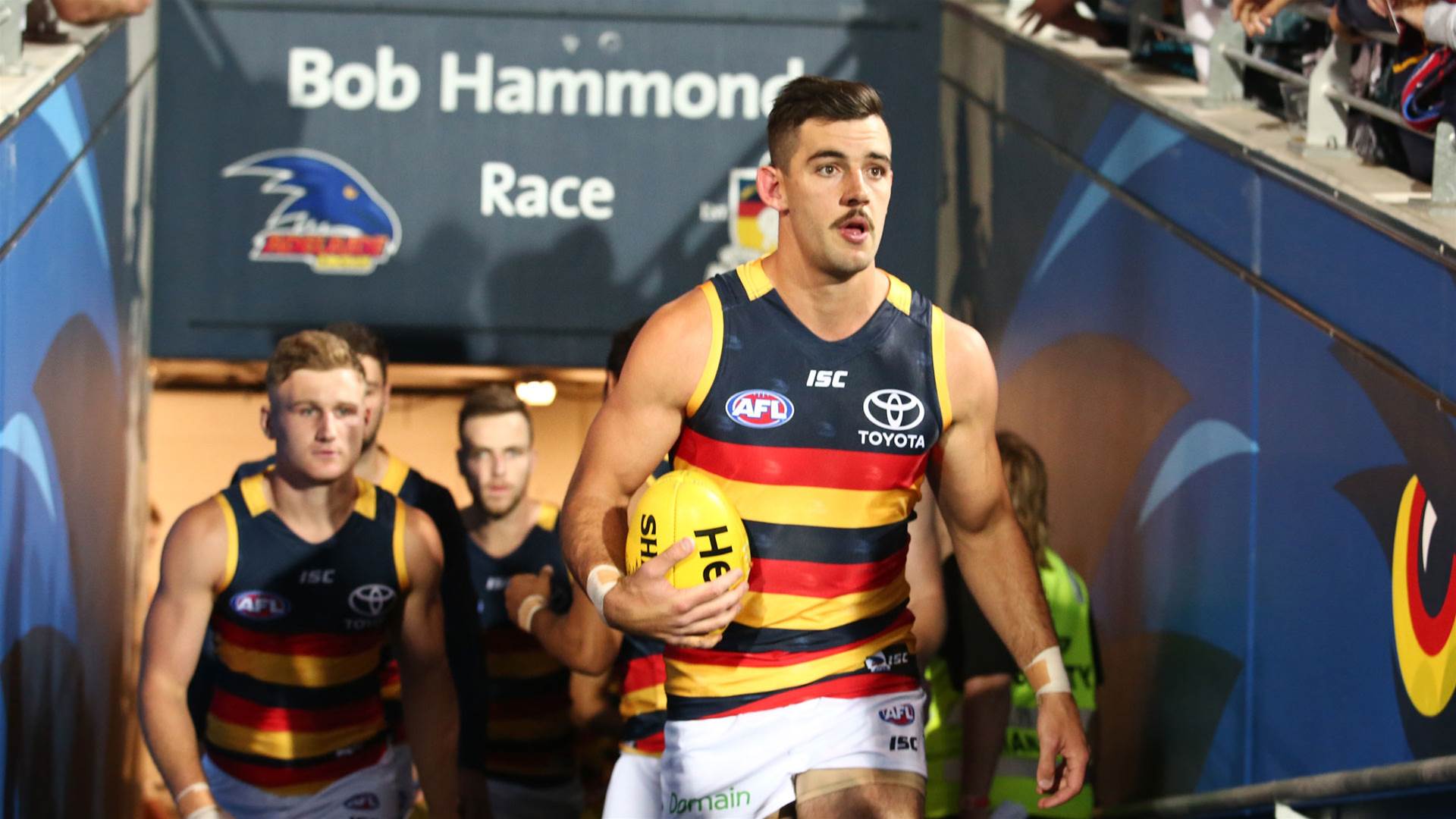 The Crows enter the cauldron. (Photo by Getty Images)

From memory the game basically took this course: Port blasted away early, the Crows climbed back, took over the lead and held it for most of the second half. The much-more learned blokes either side of me (a shout-out to Sean and Dean) lamented Port’s turning over of possession and the Crows’ ability to make them pay.

As I said, my contact with the live version of this sport has been limited: a school-mate took me to my first game (Swans vs Dons) at the SCG in 1995. A few years ago I was a guest of the AFL’s at the second or third Swans-Pies match played at ANZ Stadium. I’ve even sat and watched a game with at-the-time Stayan of the Year Mick Dodson, a season ticket-holder who drives up to Sydney from Canberra on game days. The fourth game I ever watched live was played at the GWS Giants’ home ground. I was there mainly to watch a message-runner for a feature story I was working on.

The point is, not that I can remember specifically all four games of AFL that I have ever attended, but that during those 20 years I have noticed a distinct sharpening of the play, a crispness in passing and kicking and generally a faster sport being produced at the elite level. The fumbling just wasn’t there on Saturday night. It was seriously fierce stuff between two teams that genuinely don’t like each other. Think Cowboys vs Broncos but without the Queensland love-in aspect.

Wherever you are in Australia, whatever sport you support, mark the next Showdown in your diary and go and watch it. It’s exciting stuff.