Has Australia’s rugby women’s sevens squad redesigned the blueprint for how nations should prepare their teams for an upcoming Games?

In March this year Inside Sport visited the Aussie rugby sevens’ base at Narrabeen on Sydney’s northern beaches.

The sevens’ admin office is a clearing kick away from the Manly Sea Eagles’ HQ - a series of converted demountable classrooms. Whenever a journo turns up here, the men in maroon get nervous, wondering who’s under the blowtorch today. But I wasn’t here for them.

I had been searching for a real-life example from this Aussie sevens recruitment program I’d heard so much about – the one where they were collecting female athletes from other sports in their search for Olympic gold.

Chloe Dalton, the Pearls’ Singapore-born utility, conversion taker and restarter, standing at 180cm tall, particularly ignited the interest. Sure, a touch footballer, sprinter or rugby league player making the switch to sevens was a big enough leap, but a basketballer? And a WNBL player at that? We had to check this out.

Make no mistake, the Pearls’ gold-medal performance at Rio came on the back of a lot of blood, sweat and tears. Inside Sport has tracked Australia’s men’s and women’s rugby sevens progress for the last three years in the pages of our monthly magazine. Every time we’d ventured to Narrabeen in the lead-up to this morning’s 24-17 win over the Kiwis, we’d been greeted by a troop of players only too glad to help out with anything we needed, but you could always tell they’d been smashed in another session in which they’d left every particle of themselves on the paddock; it was cherry-red cheeks, intense stares into the distance and sore limbs all-round.

This particular day I sat down with Dalton, then-22, on one of those wonky, knee-high wooden fences painted green which you see at any community sports oval. It was as far away as Olympic glory as you could get. In sweltering late-summer humidity and with barely enough energy to eat her healthy post-field-session lunch, Dalton, who had missed a few World Series rounds through injury, took me through the squad’s long and arduous pre-season which led up to the five-stop Series’ commencement in Dubai.

She shared how, as a team, they’d been working ultra-hard back here in Narrabeen. Out on the field, the combinations had been flowing beautifully; the side’s defensive record in their recent hit-out at Sao Paulo was great in terms of tackles made. Dalton had broken her arm in 2015, the same one she’d fractured twice before, and “had a new plate and screws put in there”. Her return from surgery was only one or two tourneys away.

I was keen for her to touch on the mechanics of how a basketballer turns into a rugby player. “Just my general ball skills and hand-eye coordination were things that were quite helpful,” she explained of her sporting conversion.

“The other thing was my aerial skills: on restart reception, being able to get up in the air, because that’s normally quite a big contest on the restarts. So I’ve continued to work on that and have that as a point of difference. My kicking probably didn’t come from basketball … probably doesn’t transition too well.”

“We talk about ‘points of difference’ a little bit here in terms of just trying to develop something you can have as a skillset that kind’ve makes you stand out a little bit.”

Make no mistake; without coming into contact with them since their brilliant win over the Kiwis in the final at Rio, the Aussie Pearls would know of the impact their gold medal will have on young, emerging female athletes across Australia. They’ve known for a while now. You’re about to find out their value as role models as they’re paraded in front of media outlets of all kinds upon their return. It got busy for them in the lead-up to their Rio departure, as they met radio interview gigs, women’s magazine spots and national sports mag photoshoots in ultra-professional style.

“The opportunity and the pathways that are available now in rugby sevens, particularly for girls, is something that’s not common across a lot of sports,” Dalton generously shared back in March. “The professionalism and the fact we’re based here in Narrabeen is a pretty amazing opportunity. The majority of the girls have transitioned from touch football, and obviously Elia Green from sprinting. There have been a couple of other different sports, so it’s a pretty great opportunity.”

The Pearls, led by their superb coach Tim Walsh and his dedicated staff, haven’t just created history by winning the Olympics’ first-ever women’s rugby sevens gold medal, they could very well have re-designed the blueprint for how nations should prepare their teams for an upcoming Games – recruit from far and wide, inside and outside the square, sort out what it is you’re looking for, and who knows where you’ll end up? 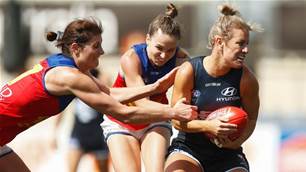 3 Things We Learned in Semi-Final 3: Carlton Blues vs Brisbane Lions