Much has been made of the New South Wales Blues’ poor State of Origin record over the past decade. When Queensland captured the shield for the third-straight year in 2008, they had earned a slice of history as the fifth Origin outfit to achieve such a streak. When they won their sixth-straight series, we knew we were witnessing something never to be seen again. When they captured nine in a row? Well, it became downright embarrassing to admit you were from New South Wales.

And so it goes on for the Blues, as they lament their tenth series loss from the last 11. However, whether it’s a social thing, a code thing or a “stop, stop, they’re already dead” sympathy, what gets forgotten around this time every year is the losing streak of another famous outfit, the pride of Australia, our Wallabies.

The men in gold are perhaps the biggest benefactors of State of Origin’s all-consuming growth. Year upon year, just as the Blues suffer another defeat to Queensland, so too our 15-man brigade tends to lose out to the powerful, world-conquering force that is New Zealand. Amidst Origin’s hype, it’s as if the Wallabies are able to hide in the corner and escape the ridicule routinely reserved for the Blues.

Because what may help the Blues feel a little better about their nine-year streak of woe is that the All Blacks have held arguably rugby union’s most prestigious prize going on 13 years now. Think about that: the last time the Aussies claimed its ownership, back in 2002, the Sydney Olympics were only two years gone, John Howard was our Prime Minister and Kath and Kim had us laughing at ourselves - or was that everyone else - as it premiered on the ABC.

Rugby’s attitude to the Wallabies’ 13-year drought is a healthy one. Rather than concentrate on the annual Bledisloe runners-up, union prefers to celebrate the mite and strength and dominance of the All Blacks. Look at them go! They’re amazing! What the Blues would pay for a similar worshipping of the Queensland Maroons each year instead of the focus being on the team being slaughtered … Oh well boys, that’s why you get paid the big bucks. 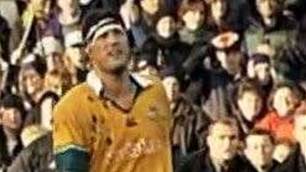