The 1987 VFL season was a memorable one football fans all over the nation. The league took on two more interstate teams, the West Coast Eagles and the Brisbane Bears joining in on the fun.

The Carlton Blues were in the midst of a transitional period. Coming off a Grand Final loss to a rampant Hawthorn side in 1986, club champion Bruce Doull and captain Mark Maclure called end to their illustrious careers.

The club captaincy was handed to a young Stephen Kernahan in only his second year at the club. 1987 was also a testing season off the field; defender, Des English was battling cancer, and young gun Peter Motley was in a serious car accident early in the season.

It was all up against the coach, Robert Walls, in his second year coaching the Blues. Trouble aside, on the field, the Blues were in great form.

They finished on top of the ladder, only losing four matches throughout the season. After a successful finals series, they faced Hawthorn in a classic Grand Final rematch. 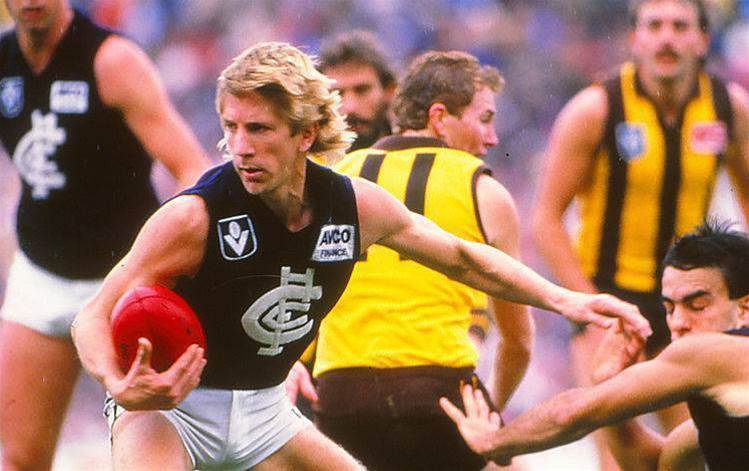 Hawthorn had been the team of the decade to date and had beaten Carlton 10 out of the last 12 meetings.

Despite being all-conquering for most of the decade, the Hawks, had their fair share of luck on their way to the Grand Final in 1987. Down by four points in the dying seconds of the preliminary final against Melbourne, Gary Buckenara was awarded a free kick 55-metres out from goal.

Infamously, a young Jim Stynes ran through the mark, and the resulting 15-metre penalty was enough to put Buckenara in range. He kicked truly and broke Demons’ hearts all across the country.

Prior to the 1987 Grand Final, Australia’s Rugby coach, Alan Jones famously spoke to the players with a classic ‘win one for the Gipper speech’. The Blues were ready.

The Grand Final itself was in the record books for a long time; It was hot. Hot enough, that both Stephen Silvagni and Michael Tuck wore sleeveless jerseys. One can only imagine the effect of the sun on those barely-exposed upper arms. 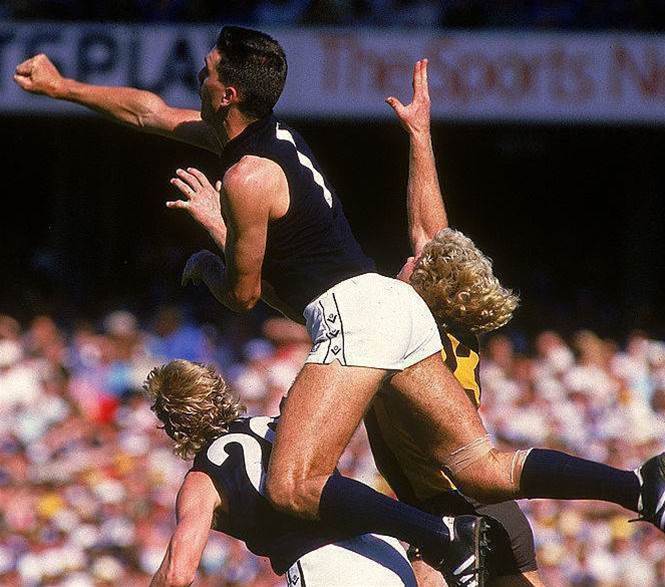 After being down at the end of the first quarter, the Blues kicked away in the second and slowly built a lead, defeating Hawthorn by thirty-three points. The win was the club’s 15th flag and the first since 1983.

The versatile David Rhys Jones sacrificed his own game to keep opposition forwards, Dermott Brereton goalless. He was awarded the Norm Smith Medal for his effort on the Hawks’ star

Mick Kennedy was a versatile player who plugged a lot of holes in the Carlton side throughout the 80s. In the Grand Final, he was sent to the forward line to play a defensive role on Russell Greene. Kennedy was controversially released before the 1990 season. From there he quickly moved to the Sydney Swans, where he played the rest of his career. After retiring, Kennedy moved around Victoria, coaching and playing for a number of rural and suburban clubs. Most notably, Frankston, Dandenong, and North Ballarat. 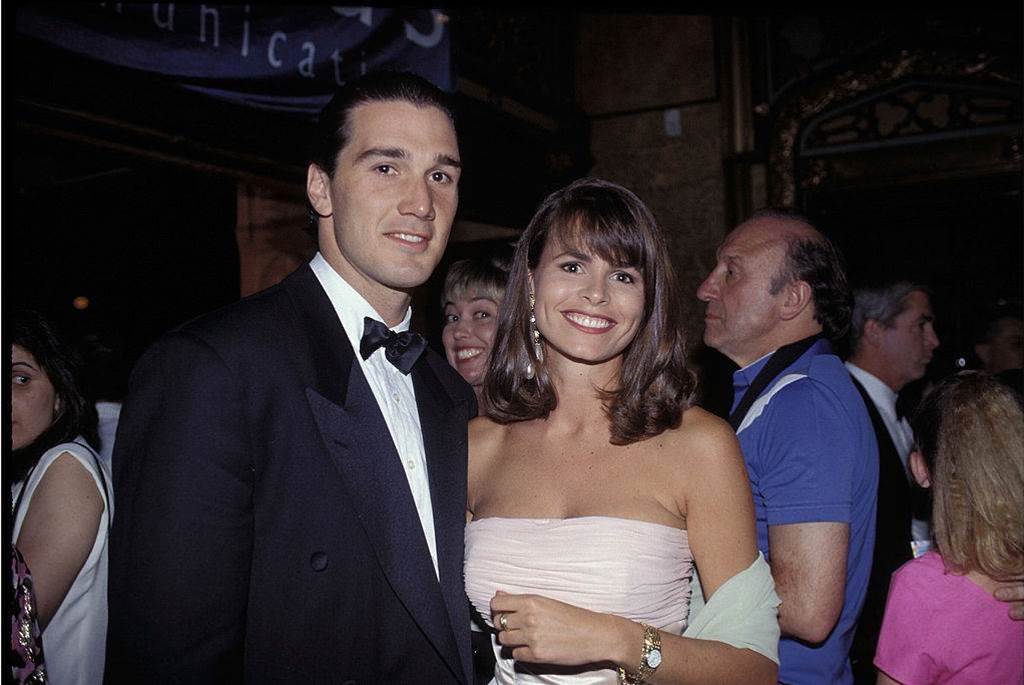 Stephen Silvagni and his wife Jo

There is no surname more synonymous with the Carlton Football Club than Silvagni. Following in his father, Sergio's footsteps, Stephen was a talented, but inexperienced twenty-year-old fullback in 1987. Silvagni was dropped for the 1986 Grand Final, and it lit the fire that helped turn him into a legend. In 1987's Grand Final, he kept full-forward Peter Curran to one goal. In the following years, Silvagni would become the greatest fullback in the history of the club, and arguably the game.

Silvagni called an end to his illustrious playing career in 2001. After retirement, Silvagni worked as an assistant coach for a number of AFL clubs, before being appointed as the inaugural list manager for the Greater Western Sydney expansion club. After some time in Sydney's west, SOS returned to Carlton to take over the Blues' list management duties in 2015. Stephen's son, Jack is now running around in the Navy Blue, having cemented himself in Carlton's senior side.

After starting his career as a goalkicker, 'The General' became a mainstay in the Carlton backline for a long time throughout the 80s and 90s. He was a player with amazing concentration and would play on opposition forwards of any size. Dean was one of the better defenders in the league for a long time, making the International Rules squad in 1990. In the years after retirement, he has stayed in football. He spent time as the Blues' runner, he coached suburban clubs, coached Carlton's VFL affiliate, and was an assistant coach at GWS Giants. Dean now is coach of Bullioh in the Upper Murray league. Show up on a good day and you may even see Dean running around in the firsts.