Rich Hegarty on his cover from 2001 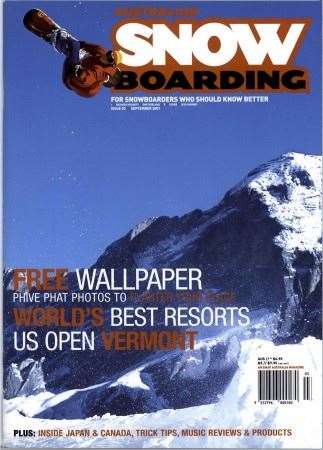 Tell us about the shot Rich, who took it and how did it come about?

The mountain behind is the North Face of the Eiger or as the Swiss call it ‘Mordwan' which means 'Murder wall’ as 64 climbers have died trying to climb it. It is the largest North Face in Europe and one of the hardest rock climbs in the world. As a kid I watched a Clint Eastwood movie about that rock climb and I always wanted to go and check out the place.

The conditions in the resort at the time were really hardpacked and wind affected so we spent a few days just cruising around. I came across this spot literally right off a chairlift on the side of a run and it was all windblown snow shaped in a perfect hip. Almost no work to build we just threw a takeoff on it and it was good to go.

What was the scene like back in 2001? Who was killing it?

2001 was a huge year for me. The sport was changing rapidly; arguably the fastest progression period in snowboarding. On one side of the Atlantic was Forum with riders like JP Walker, Jeremy Jones and Nate Bozung totally changing street and tech jib style mountain riding and on the other side were the Absinthe Crew taking huge park kickers and backcountry booters to a completely new level. The most memorable moment for me of 2001 was JP Solbergs part in Transcendence by Absinthe Films. This part really rewrote snowboarding for me. This was the start of the real glory days for video part riders and something I was so stoked to be in the sport to see happening around me.

Better than it is now I can confidently say. It was the glory days of the sport. You could actually try a trick and potentially no one had ever done it before you. Things were changing rapidly.  There were also loads of brands with big bank accounts getting into the sport trying to make their mark which meant that it was open season for riders to cash in. You didn’t have to be a competition rider, nor a street kid - you could just be a snowboarder and be able to make money from the sport. I had a really good run where for 10 years or so my only job was snowboarding and the only requirement was to get photos in magazines. I look back it it now and can’t believe how lucky that was as I see kids now doing tricks that are so much crazier and they can’t make a cent out of the sport until they literally start winning big events. Snowboarding was also still a crazy party scene. It was way more of a lifestyle than a sport thinking back on it. Riders had images they were paid for and not so much results. It was a really easy time to get addicted to snowboarding.

I have never left it. I still ride as much as I can. This year I have been riding in Japan, Korea, China, Austria and at home. I hope I am always snowboarding. I never want to leave it and join the real world. The real world scares me. I started Stylewars the year after this shot in 2002, went and lived in Europe for a few years running Method and now run The Mile High and I also now run the World Snowboard Tour. I have in the last 12 months started working with Australia’s national sporting body for snowboarding and am trying to help the sport on everything from getting slopestyle in the Interschools to helping our top riders try to win the Olympics. So there is no ‘post snowboarding’ as I am still snowboarding. I have 2 kids now that both love it as well so the ride will continue I guess for years to come.