The 53rd edition of Snowboarding Magazine, featuring Ryan Tiene on the cover

It was a family affair back in 2012 in Australian Snowboarding. We had Ryan Tiene front and centre on our cover with a trademark backcountry booter and younger brother Dane features on the side text, with a brief stint in jail. What a proud day for the Tiene family.

In other news Tom Pelley was still around, Chris De Campo had the trip of a lifetime with the Helgasons in Japan and DVDs were still a thing.

Tell us about the shot. Who took it and how did it come about?

This was the first feature I hit back in 2012 we where struggling to find anything as most features hadn't filled in with snow yet but because of that reason this ice was still exposed and there was a perfect air over it. Dominic Gauthier shot it.

What was happening in 2012. Where were you and what were you filming for?

2012 was the year I turned pro for DC the announcement came out a few weeks after this shot was taken. I was filming for the DC team movie "must be nice" out in the Whistler Backcountry

How important are covers to you and your career?

They mean a lot to me I feel like I have always struggled to get covers for some reason compared to a lot of Aussies boarders. So when I get one I'm pumped!

What are your plans for this upcoming winter in Australia?

I'll be down Jindy a bit doing a camping mission, the Thredbo banked slalom and just general boarding. Also going to be filming and shooting some stuff for social media and a Thredbo edit ohh and I have to defend my highest Ollie crown hah 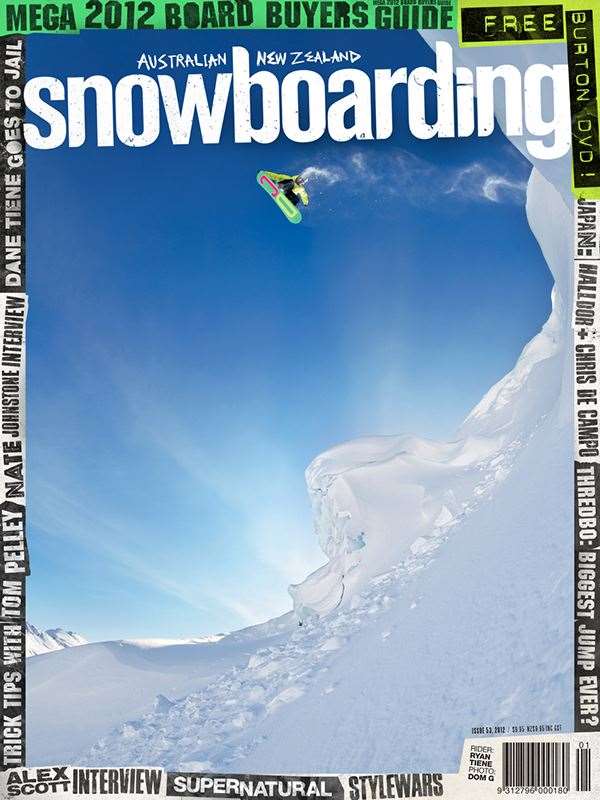