Tell us about the shot Cal, who took it and how did it come about?

The Mag needed a cover shot and asked Scott Needham (SNP) to sort it.  The entire mountain was ice and poor snow but we found this one hit near the Bluff at Thredbo and only had one shot at it, one turn on it and the snow was gone. Scott was always good to work with, and was so good at catching the perfect pics.

What was the scene like back in 1993? Who was killing it?

The 90's was a cool time, we started to see more money in the sport, jumps were getting bigger and people were really starting to push hardcore backcountry more. The scene was still off the hook and there were many wild times.

Guys that I thought where ripping where Craig Kelly, Noah Salasnek, Nick Parata, Chris Roach among others. These guys had a good mix of freestyle free ride and big mountain. The 90's also had a new wave of riders coming through including a handful of Aussie rippers trying to take on the world.

We had no money but somehow survived. Looking back at the 90's now it was a time where old school was ending and the modern way was beginning.

How do you view snowboarding now? Do you still get plenty of days on your board?

I love snowboarding as much as ever, it's ingrained in my blood. In the Australian winter I ride with my kids a couple of days a week and if it dumps I’m usually there for most of the day, then back to work. The last few summers I've had great snow in Canada and USA either Heli skiing or tearing it up with my kids.

Life for me is very busy with a great family 2 kids and a successful  business. We are at the skate park every second day or racing mountain bikes, snowboarding or at the beach. No matter how old I get I always consider myself just a snowboard bum. I've been lucky to have been involved in Snowboarding in the early days and it shaped who I am now, and to have had some great mentors in the sport who have helped me with my sporting and financial goals. 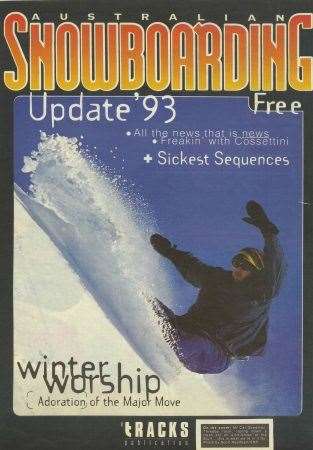 Cal Goodman ripping the top off one at The Bluff, Thredbo. Circa 1993. Photo: Scott Needham