Danger, danger, we may have an awkward situation on Brownlow Medal night. The suspended Patrick Dangerfield may be awarding someone else the medal despite claiming the most votes.

The raging favourite to win the Brownlow could become the fourth man in VFL/AFL history to have the title revoked from him despite earning the most votes.

Dangerfield is ineligible to win the 2017 Brownlow after accepting a one-match ban for a hit on Carlton's Matthew Kreuzer, ending his chances of going back-to-back.

Statistically, Dangerfield’s stats are just impressive, if not better than his 2016 record breaking Brownlow triumph, where he recorded a whopping 35 votes.

Although his disposal and mark counts are slightly down, his tackling and goal scoring are significantly up and he’s earning more free kicks.

Here’s a look back at the three previous occasions where the rightful winner was stripped of the honour.

The first came in 1996, North Melbourne’s Corey McKernan would’ve tied with James Hird and Michael Voss on 21 votes, but was suspended for kneeing Geelong’s John Barnes.

Just 22-years old at the time, McKernan watched the event from home, icing his knee ahead of the Grand Final against Sydney. He went on to have 30 disposals and help North Melbourne win their first premiership since 1977.

Next was the Western Bulldogs’ Chris Grant in 1997, the year after. Grant would’ve won outright with 27 votes, pipping Robert Harvey by a single vote. He was judged best afield by the umpires in Round 7, but was later controversially reported by then AFL football operations manager Ian Collins for an open hand slap to Hawthorn’s Nick Holland.

Grant won several media awards that year, but like McKernan he didn’t attend the count due to his suspension and bared the result from home.

Finally, we fast forward to 2012, a Brownlow retraction more familiar to contemporary fans. Essendon’s Jobe Watson was awarded the medal in 2012, beating Sam Mitchell and Trent Cotchin by four votes.

However, in 2016, he was retrospectively ruled ineligible due to a suspension from using a banned substance, as part of the notorious Essendon supplements saga.

The writing was on the wall for Watson. Other major sport stars and teams who’d earned awards whilst corrupting league rules were stripped of those honors and he was treated no different. Cotchin and Mitchell were deemed co-winners this past off season.

It would be a tragedy and somewhat of an injustice if Dangerfield was denied back-to-back Brownlow medals. However, it’s a stark reality the Geelong superstar faces. 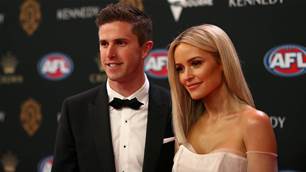