A quick summary of round 12 of the AFL in case you missed it.

The opening bounce of round 12 was at a festive Adelaide Oval, where the fans were celebrating the 25th anniversary of the Adelaide Crows. Those celebrations quickly turned into despair, however, as the Hawks muted the crowd and won their third game in a row.

Richmond had its four-game winning streak snapped by the in-form Eagles, who won their eighth game from their last nine. West Coast has overtaken the Swans to claim second spot on the AFL ladder and now sits just one win behind their state rivals Fremantle.

After what has been a nightmare season for Carlton, interim coach John Barker scored his first win for the Blues, moving them off the foot of the table and keeping the Power out of the top eight.

GWS had an opportunity to reclaim its position in the top four against North Melbourne, but was instead taught a harsh lesson by the Kangaroos as they chase a spot in the top eight.

The Western Bulldogs put themselves back in the footy finals race after their big win over the hapless Lions, who suffered their third loss in a row.

Corey Enright became just the third Geelong player to reach 300 games, but his celebrations were cut short by the Melbourne Demons, who ended their nine-year hoodoo against the Cats. 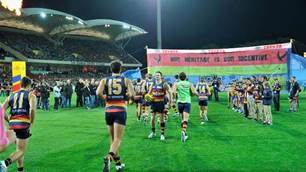