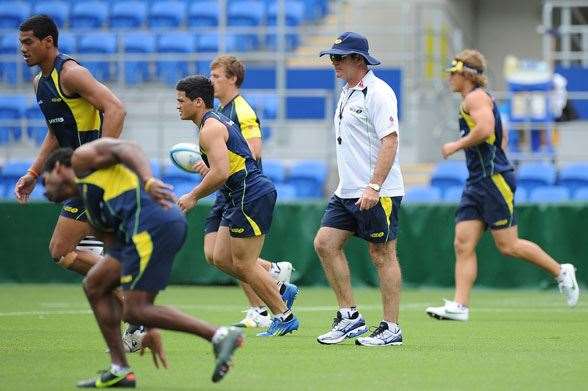 Michael O'Connor runs the Aussies through their paces on the Gold Coast in 2012. (Photo by Getty Images)

Former Australian rugby Sevens coach Michael O’Connor is expecting local and expatriate rugby fans to throw their support behind the HSBC Singapore Rugby Sevens when the tournament roars into action April 16-17 next year.

“I was actually in Singapore for an invitational Sevens event last year,” ‘Snoz’ told Inside Sport. “Singapore has a magnificent stadium, it really does; the National Stadium is world-class. And that’s the exciting thing about Sevens now. Some of the stadiums they have played in – like Twickenham in London and Port Elizabeth in South Africa – have been amazing venues. Port Elizabeth was a great stadium. Cape Town in 2016 will be another one … as well as Vancouver.”

O’Connor was a star of rugby league in Australia between 1983 and 1992 for the St George Dragons and Manly-Warringah Sea Eagles. He won a premiership with the Sea Eagles in 1987, but it was his 1991 State of Origin game-winning sideline conversion for New South Wales at the Sydney Football Stadium in pouring rain which Aussie footy fans would most fondly recall of his brilliant playing career.

It was in the 15-man game where the winger/centre began his elite-level playing career, appearing firstly for Canberra Royals and then North Brisbane across 1978-82. He would later become a dual international for Australia, appearing in 18 games for the Kangaroos and 13 for the Wallabies.

Among the bigger names under O’Connor’s guidance during his coaching tenure between 2008 and 2014 were current Wallabies 15s fly-half Bernard Foley and the Queensland Reds’ lightning-fast Lachie Turner, who has collected 15 caps for Australia to date. 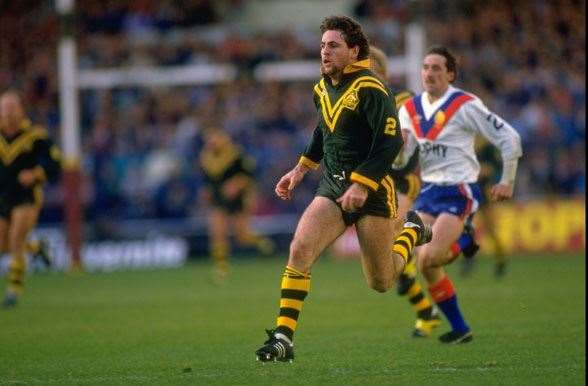 In a previous life, Michael O'Connor was a rugby league star. Here, he chases down a clearing kick at Leeds against Great Britain in 1986. (Photo by Getty Images)

O’Connor no longer has an official role with Australia’s Sevens, but he remains an important adviser for the squad, travelling to select tournaments and providing insights to current coaching staff. Indeed, he was there again looking on from the sidelines during Australia’s Oceania Sevens win in mid-November, an achievement which secured the Aussies’ spot at the 2016 Rio Olympics. O’Connor also identifies potential talent in Queensland, which over the years has proven a particularly rich hunting ground for the Aussies.

During O’Connor’s time in charge, the Aussie squad won the London Sevens in 2010 and also took out the Japan event in 2012. O’Connor is predicting an exciting trajectory for this year’s Sevens World Series with the introduction of the Singapore stop, the only tour stop in South-east Asia. “It’s exciting for Singapore that they’re back hosting a Sevens tournament,” he enthuses. “They’re taking over from Japan; so it will be Hong Kong in early April and then Singapore the following weekend on the world tour.”

O’Connor, named in the “top 100 Wallabies of all time”, is predicting the Singapore tournament to be high on the hit list of local, visiting and former Australian-based rugby fans alike. “There may not be quite as many Aussie expats there as in a place like Hong Kong, but there are still a lot based in Singapore; business people and the like,” O’Connor says. “Singapore definitely has a rugby community; there is a healthy interest in rugby across the country. It is played in schools, and Singapore has had a sevens team for a while now. It’s a good stadium. If they get all those rugby followers along, the event should work really well.”

Visit www.singapore7s.sg for more information on Singapore Rugby Sevens 2016 or to book your tickets.