An elusive medium forward who has an impressive natural leap, clean ball handling skills and a smart user of the ball from either foot around goals. He is a mercurial type of player and was dangerous up forward in Western Australia's 2019 NAB AFL Under-18 Championship winning team, averaging 12.2 disposals and 1.5 goals to earn 2019 NAB AFL Under-18 All-Australian honours.

Small forward who presents well, using his anticipation and strength with his overhead marking to be a lively target. Very good one-on-one player who can turn his opponent inside out and has innate goal sense, kicking four goals against both the Allies and South Australia this year in the 2019 NAB AFL Under-18 Championships earning 2019 NAB AFL Under-18 All-Australian honours. Averaged 16 disposals and 1.8 goals in four games in the NAB League this year.

Left-footed medium forward who can also go back. Extremely strong overhead and a long penetrating kick with innate goal sense. Has kicked 42 goals over the last two years in just 23 games for the Oakleigh Chargers in the NAB League as well as kicking four goals against the Allies as a bottom ager last season. Injury curtailed his 2019 season playing only nine matches for the year with the Oakleigh Chargers and Vic Metro but he is on track to make a full recovery.

Left-footed tall defender with very good closing speed and repeat efforts. A versatile type who played back, midfield and forward in the 2019 NAB AFL Under-18 Championships and showed strength overhead and sound goalkicking technique. He averaged 10.8 disposals, 3.8 marks and 1.8 goals across the Championships, including kicking four goals against Western Australia. He injured his shoulder late in the year and missed the NAB League finals.

An outstanding aerialist with intercept marking a key feature of his game. He is a strong decision-maker who uses the ball in a neat manner on his left foot. He averaged 22 disposals (79.5 per cent efficiency), 5.2 marks and 4.5 rebounds in the 2019 NAB AFL Under-18 Championships and was named in the 2019 NAB AFL Under-18 All-Australian team. A consistent performer in a variety of roles with the Dandenong Stingrays, he averaged 22.3 disposals across 12 matches. His brother, Lachie debuted at the Western Bulldogs this year. He joins the likes of Jayden Stephenson and Sam Walsh as winners of the AFL Life Members Scholarship. 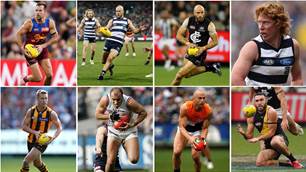