Fiji looking to defend its Singapore crown from 2006. 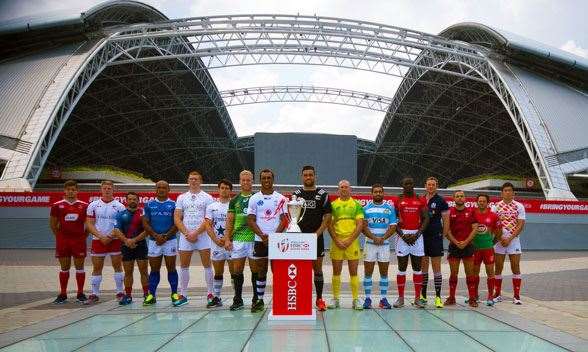 The world’s best rugby teams have arrived in Singapore and are ready to rock, ruck and rumble at the 2016 HSBC World Rugby Singapore Sevens.

The festivities kick off with an ancillary tournament, the South East Asia 7s, on Friday at Yio Chu Kang Stadium with seven countries competing. Southeast Asian Games champion, the Philippines, will take on Malaysia, Indonesia, Thailand, Laos, Brunei and two Singapore sides in the men’s competition, while the women’s tournament features favourites Thailand, Singapore, Malaysia, Indonesia, Laos and the Philippines. Both the men’s and women’s finals will then be played during the Pool stages of the HSBC World Rugby Singapore Sevens on Saturday at the National Stadium.

The HSBC Singapore Sevens is the eighth leg of the 2015-2016 HSBC World Rugby Sevens Series and Fiji is looking to defend its Singapore crown which it won in 2006.

In addition to world-class rugby, the two-day HSBC Singapore Sevens promises great entertainment as British superstar DJ Pete Tong will play an exclusive set after the conclusion of the Pool stages on day one, while local band Shirlyn & The UnXpected will rock the stadium on day two. Meanwhile on Sunday, the first schoolboy Under 14 Schools Sevens final to be played at the National Stadium will take place, featuring ACS Independent and Raffles Institution.

Over the weekend, the family-friendly Fun Zone awaits rugby fans young and old. The young ones can try their hand at the "Rugby Superhero" challenge stations while the young at heart can impress their friends and families at the "Skills Challenge Zone". Parents can also enjoy some rugby action while their little ones are thoroughly entertained at the "Kids Drop Off Zone". A pair of return air tickets to Fiji, courtesy of Fiji Airways, will also be given to the best-dressed spectator each day, so expect to see plenty of rugby tribes all dressed up for the occasion.

“We are expecting over 50,000 spectators over two days at the National Stadium and all of them can expect a world-class sporting event with great entertainment inside the stadium and around the Singapore Sports Hub,” said Mr Low Teo Ping, Chairman of Rugby Singapore.

“The Singapore Sevens is not just for rugby fans; members of the public can also be part of this rugby carnival by visiting the Fun Zone outside Stadium MRT or join us at the "Music After 7" three-day rock music festival and after-party at Clarke Quay. This is a global rugby celebration for everyone visiting or living in Singapore.”

“We are extremely pleased that the HSBC World Rugby Sevens has returned to our National Stadium. Beyond the rugby fraternity, the community-at-large in Singapore and the region are treated to top-class sporting action as the world’s top teams vie to win the series,” said Mr Lim Teck Yin, Chief Executive Officer, Sport Singapore. “We are also excited to see the South East Asia 7s finals and our National players from the Under 14 school boys Sevens in the line-up of matches, adding local and regional flavour to the international tournament series. We hope that events like these will continue to inspire Singaporeans to live better through sport.”

“We are thrilled to be able to bring the HSBC World Rugby Sevens Series to Singapore this week, introducing one of the world’s fastest growing sports to new audiences here,” said Mr Giles Morgan, HSBC, Global Head of Sponsorships and Events. “2016 is such a pivotal year for rugby, not just globally through the Olympics, but especially so in Asia, with the HSBC World Rugby Sevens Series hosting two of the tournaments in Singapore and Hong Kong.”

The HSBC Singapore Sevens kicks off at 10am this Saturday morning with a Pool A match between South Africa and Scotland. The full fixtures can be found at http://www.singapore7s.sg/ruck/fixtures/

Tickets to the HSBC Singapore Sevens range from S$50 to S$150 (prices exclude booking fees) and organisers have just announced that more Category One S$150 tickets will be made available from tomorrow due to surging demand. All spectators can also enjoy a host of benefits and discounts at partner outlets islandwide with their tickets. Information and online ticket sales are available on www.singapore7s.sg