The finals picture may have begun to take shape in round 20 of the AFL, but there is still plenty of footy action left this season.

A massive weekend of action kicked-off in Sydney where the Swans defeated Collingwood 87-76, effectively ending the Magpies' finals hopes.

Saturday saw the Crows demolish a hapless Essendon side 171-59. The match proved to be James Hird's last match as the Bombers' head coach after he resigned effectively immediately this week.

North Melbourne made it six-straight wins after they beat the Saints 120-83 in Tasmania.

Meanwhile, Port Adelaide put a dent in the Giants' finals hopes after beating the boys from Sydney's West 111-90 in Adelaide.

The Hawks halted Geelong's charge towards the finals with a 36-point win over the Cats at the "G".

Concluding Saturday night's footy was the bottom-of-the-table clash between Brisbane and Carlton. The Lions came out on top, winning by 64 points.

On Sunday afternoon Richmond returned to its winning ways by smashing the Suns by 87 points.

Meanwhile, the Western Bulldogs made it four on the trot as they destroyed the Demons by 98 points.

The round concluded in the West, where the Eagles claimed bragging rights over rivals Fremantle, beating the table-topping Dockers 104-80 to cut their lead at the top of the ladder to six points.

Check out the best pictures from last weekend's action in our gallery above. 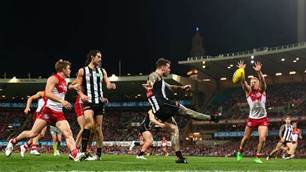