If the league/organisers and clubs aren’t pulling in the same direction as far as this abbreviated annual rugby league tournament is concerned, what’s the point of staging it?

I wasn’t at the 2017 event, but like many TV viewers, as the play progressed I was curious as to when the empty seats which I could see in the background of Fox Sports’ high-quality coverage would be filled. I took to Twitter after the event and asked: “attendances at #NRLAKL9s seemed well down this year. Why do you think that was?”

I received a range of answers back, some covering reasons I hadn’t considered or even been aware of. The majority touched on the likelihood that perhaps the Auckland locals are just over it and that the event needs to be moved ASAP. Another Tweeter, Fou, suggested “Waitangi wknd so people were out of Auckland for the long weekend and 2 major concerts were on the same wknd as well.” So there was that, too.

Ticket prices are another consideration as to why the 2017 Nines’ attendances were down on last year’s blockbuster turnout. They ranged from $69 for the cheapest two-day pass, to $299 for a halfway-line seat across the weekend. Not bad value on the face of it, however when you’ve been promised a parade of the game’s biggest stars and they don’t turn up, that three hundred bucks starts looking a bit steep.

Some NRL club representatives are openly against the tournament, which doesn’t do much for generating excitement amongst fans. As a Panthers devotee, I have to admit that reading about Phil Gould’s opposition to the Nines kinda made me all “meh” about the whole ordeal. His plan of sending over a squad with just four big names in it seemed to have backfired, with the young Panthers squad reaching the tournament’s final. 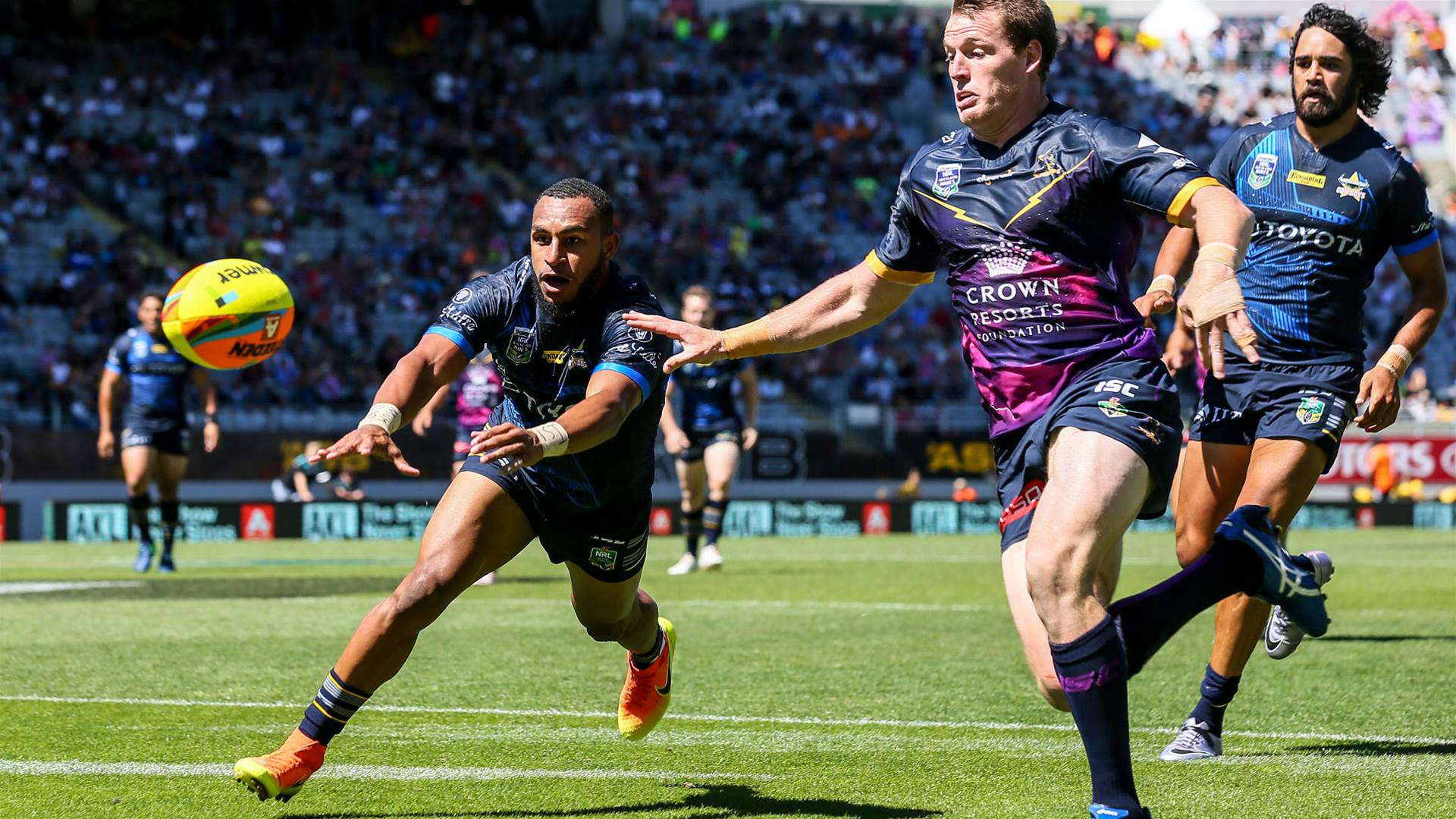 Gideon Gela-Mosby of the Cowboys (left) and the Storm’s Tim Glasby at Eden Park. (Photo by Simon Watts/Getty Images)

Many of the dropkick-for-goal conversion attempts by the players across the weekend were made with as much effort and commitment as someone running away from a kiss from Claudia Schiffer.

CEO of the NRL Todd Greenberg recently indicated that the tournament, founded by Duco and Auckland Tourism, is here to stay; that it’s now an important part of the rugby league calendar. But it has, since its inception, further compacted an already busy post-New Year NRL pre-season. If the answer is squeezing it into the weekend it currently occupies because that’s the “only” timeslot it can be played, then we’re keeping it for the wrong reasons. It either has a worthy place in the pre-season or it doesn’t.

There’s one year left to run on the current Auckland Nines five-year contract, the inaugural instalment held back in 2014. It’s a good, fun event to kick the rugby league year off, but only if all parties – clubs, players and spectators - are drinking the same Kool-Aid. Otherwise, as many others have argued, what’s the point?