As this weekend’s England vs Australia Four Nations Test approaches, we re-visit how three rugby league legends discussed the 1986 Kangaroo Tour of Great Britain and France in their various books published in the years immediately following the Tour.

Old sports books are a treasure trove of players’ thoughts and feelings about all sorts of stuff. A popular subject for rugby league player/authors a few decades back was the famous 1986 Kangaroo Tour of Great Britain and France.

Like most old-school rugby league fans, the author of this online article has over the years accumulated a fine collection of rugby league books, dating back to the explosion in the genre in the 1980s. To this day such books can still be found at garage sales, one-buck-bins and can be bought online for almost nothing.

It’s 30 years since the ’86 Kangaroos flew over and backed-up the achievements of coach Frank Stanton and captain Max Krilich’s legendary 1982 “Invincibles”. The 1986 squad needed a nickname of its own. One was thought up pretty much straight after the Kangaroos had won their last game against France: “The Unbeatables.” In 20 matches they scored 136 tries and conceded only 16. Youngster Terry Lamb played every game on the 1986 Tour. He’d likely laugh at modern players’ complaints about being overworked. Anyway, here are a few stories found within the pages of three all-time classic rugby league books discussing life on the 1986 Kangaroo Tour. 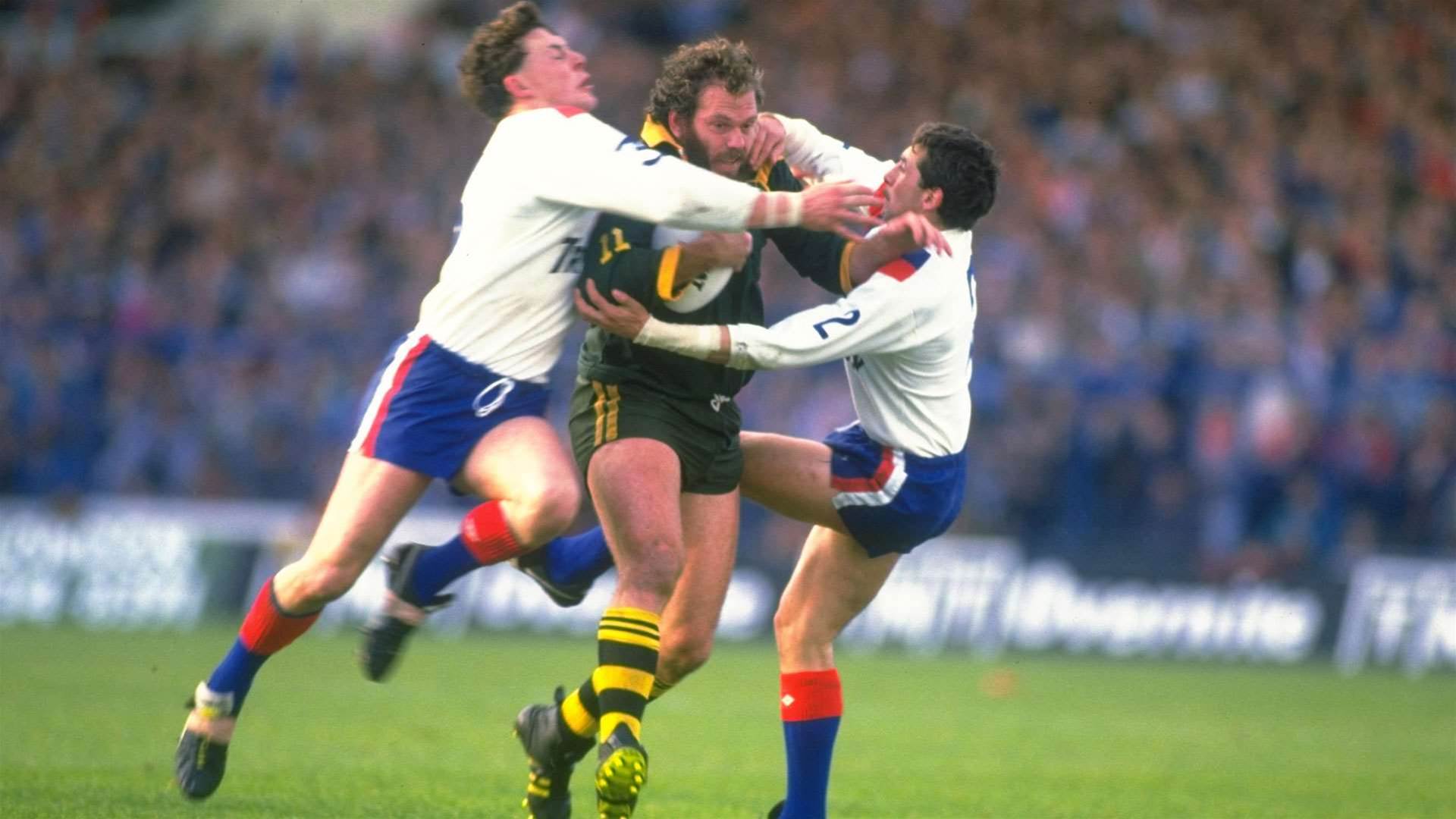 Noel "Crusher" Cleal of Australia is tackled during the Second Test match against Great Britain at Elland Road in Leeds, 1986. (Photo by Simon Brutty/Allsport/Getty Images)

WALLY LEWIS
Wally, Gene Miles, Steve Roach and Royce Simmons had pooled their resources and bought and ancient yellow Saab. It cost them 200 pounds and Wally took a gang for a run to his old lodgings at Wakefield Trinity. The car seemed very sluggish, until Wally added up the weight of the seven players on board – Miles, Kenny, Kiss, Sironen, Simmons, Roach and Wally: around 660kg, two-thirds of a tonne of prime beef.

PETER STERLING
"The First Test of ’86, at Old Trafford, was a sensational occasion. It was the day I almost wore the boots of the Great Manchester United soccer player Bryan Robson in a rugby league Test! As I went to put my boots on for the match, I noticed they were an odd pair; one was laced one way and the other completely differently. One of the boots was a size too big – and I couldn’t have played in it. I had a problem – so they took me into the Manchester United boot room, an amazing place containing more football boots than you’ve ever seen in your life. There, I tried on a pair of Bryan Robson’s boots, and, as with Cinderella, they fitted perfectly! But when I went back into the Aussie change room, Michael O’Connor realised he had the same problem as me – two different boots. So we swapped boots, and Robson’s boots missed their chance of playing rugby league."
Sterlo – The Story Of A Champion, with Ian Heads, 1989, Lester-Townsend Publishing

GREG ALEXANDER
"The wonderful record of the ’86 Kangaroos can never be denied, but it must be kept in perspective. It has to be said that the opposition was not of a high standard. The Poms had some fine individual players in Hanley, Ward, Lydon, Gregory, Schofield and so on – but the teams we faced were generally disorganised in attack and had no idea in defence. If individual brilliance failed against us, the Englishmen would usually resort to niggling tactics to try to put us off our game."
Five-Star Brandy, with Larry Writer, 1991, Ironbark Press