What more does this legend have to do to sit among the greatest-ever blokes?

Make no mistake. When you watch Serena Williams in action, you are not witnessing just another boring, predictable sports result – instead, consider yourself fortunate to live in the time of such a brilliant athlete … one of the greatest of all time.

When called upon to produce a handful of sporting royalty, many of us, whether in deep discussion at a barbeque, at the water cooler or on a sports panel show on television, are reluctant to include the 34-year-old among her fellow greats: men like Michael Jordan, Muhammad Ali, Bolt or Phelps. There are various reasons for this, the most popular among them being that she only has to play against female competitors … in an era of low-quality women’s tennis fields and tournaments.

This strange practice of using a lack of talent to justify leaving athletes out of greatest-ever lists only seems to be applied to women’s sports. Very rarely do we question Babe Ruth’s place among the elite, even though he never had to bat against extremely talented black pitchers, or mention that Don Bradman’s list of rival countries was far less than what today’s crop has to face.

Have a look at Serena’s career stats for confirmation of her worthiness among world sport’s list of all-time greats. She’s played over 760 career games for a winning percentage of 85 percent. She’s claimed 71 titles, won Wimbledon seven times and won over $80m in prizemoney.

While we’re on the subject, perhaps more unfairly is Martina Navratilova’s regular omission from such discussions over the years as well. Martina won 167 titles, maintaining a winning record equal to Serena’s across 700-odd more games than Williams. She has Serena’s measure at Wimbledon as well, having won it nine times.

There was a funny moment on social media last year during Williams’ French Open final against Czech player Lucie Safarova. Heavily favoured going into the decider, Williams downed Safarova 6-3 in the opening set, before dropping the second 7-6. Seemingly delaying the inevitable, one woman on Twitter ordered Serena to “get on with it, stop playing with your food”. It summed up the public’s adoration and expectancy of another Williams triumph, which she eventually went on to record.

To label Serena’s year-in, year-out dominance of tennis as boring is not only selling her achievements short, but you the dear sports fan as well. In 30 or 40 years, how is “Serena winning all the time was boring” going to sit with the younger people in your life, who will have heard about her amazing run and wish they were alive to witness it? 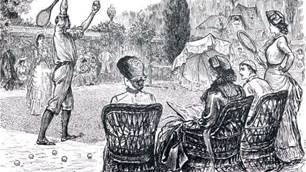