Tekno Autosport Commodore drivers Will Davison and Jonathon Webb have prevailed in the Bathurst 1000, fending off a late challenge from Shane van Gisbergen to take the victory.

Davison had to balance the conflicting objectives of conserving fuel and lapping fast enough to hold out van Gisbergen. But most of the top six runners were in the same situation with regards to fuel, having all rolled the dice on fuel strategy during a series of late-race Safety Car periods.

“I knew I couldn’t conserve too much – if I did, Shane would have pounced,” Davison said. “Every time they (the Tekno crew) asked me to conserve, I’m thinking, ‘if I do we’re going to lose the lead!’ As it was, it still coughed over the line.”

Though disappointed to have fallen short, van Gisbergen was at least pleased to see the team for which he drove last year take the win.

“We were saving fuel all day,” he said. “It would have been good to fight it out flat out, but it is what it is.”

Van Gisbergen was ably supported by co-driver Alex Premat, who became the first Frenchman to stand on the podium at the Bathurst 1000.

Nick Percat and Cameron McConville scored a surprise third place for the small Lucas Dumbrell Motorsport team. Percat and McConville were among the beneficiaries of the late race Safety Car periods, and like the winning car they were lucky to scrape home ahead of Cameron Waters’ Falcon for the final podium position.

“Cam Waters actually pushed me across the line,” Percat said. “I’ll have to thank him for that!"

Uniquely, Davison and Webb won without officially leading a single lap of the race. Jamie Whincup had actually crossed the line first, but the Red Bull Commodore driver had been hit with a 15-second time penalty for his role in an incident that put paid to the chances of the Garth Tander/Warren Luff Commodore and the Scott McLaughlin/David Wall Volvo.

After dominating in practice and qualifying, Whincup and co-driver Paul Dumbrell looked unbeatable in the early stages, at one point establishing a lead of more than one minute.

Had there been no Safety Car periods (there were no Safety Car interventions at all in the entire first half of the race), Whincup and Dumbrell would likely have gone on to a comfortable victory.

It was in some ways a race of two halves, with the first half bucking recent trends at Bathurst that have seen most of the retirements come via driver error rather than mechanical failure.

Early on it shaped up as an old fashioned test of endurance as a string of cars were struck down by mechanical problems. The most high profile of those suffering technical gremlins was the Craig Lowndes/Steven Richards Commodore. After a troubled qualifying, Lowndes and Richards were on the cusp of the top 10 when a gearshift link shaft snapped. The Lee Holdsworth/Karl Reindler Commodore suffered an engine failure on the opening lap; the Tim Slade/Ash Walsh caught fire at its second pitstop when a brake pad change went awry, while the sister Jason Bright/Andrew Jones entry lost several laps with a faulty gear position sensor.

For the latter, that issue would be the least of their problems on lap 89 when a suspected component failure pitched Jones into the wall at Reid Park.

This brought out the race’s first Safety Car, and the first of another five full course periods soon followed.

For Webb and the Tekno team, the victory completed a unique Bathurst double after their victory (ironically with van Gisbergen) in the Bathurst 12 Hour earlier this year. 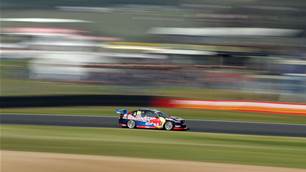