Millionaire rugby star Israel Folau has launched a $3m GoFundMe campaign to finance his fight to keep his $4m Wallabies pay deal – and still be able to make homophobic comments.

Despite being ridiculed on social media, by lunchtime more than $250,000 had been pledged despite there being no guarantees the winger will use the cash for his legal expenses.

He's targeting a $3m war chest to take on Rugby Australia for sacking him over his breach of contract for posting villifying comments on social media.

Rugby Australia has vowed to divert all resources needed to fight any legal action from Folau over his dismissal for posting a picture on instagram claiming all homosexuals would burn in hell.

Folau has lodged a case with Fair Work Australia which may go to the High Court for a likely lengthy and expensive legal battle.

He wants Rugby Australia to pay out his $4m contract and wants fans and supporters to fund the fight for him.

Folau, 30, returned to social media this morning to post another pic, with the question in capital letters: "Do you believe in the right of Australians to practise their religion without fear of discrimination in the workplace?"

It includes a link to his website and the GoFundMe page.

"I know I am putting myself on the line - this action will be very costly in terms of time, money and reputation - but I do not intend to stop now," says Folau.

"I would be very grateful for your support. Could you make a donation, within your capacity to give, in order to support my action? I have the fight of my life on my hands and every little bit will help.

"Even if I win, Rugby Australia can appeal. There is every chance that a prominent test case like this could take years and eventually end up in the High Court of Australia.

"My wife Maria and I have already spent over $100,000 of our own money, and that was just to try and deal with Rugby Australia's internal tribunal processes.

"The money I am asking for is to fund the rest of my action in court."

The move to take legal action is a U-turn on his pledge when he was in negotiations with Rugby Australia and said he would walk away if his comments were an issue for the sport or its partners.

The fundraising move has sparked a bitter backlash on social media with critics disappointed people were donating to Folau's cause while children with cancer and other worthwhile campaign fundraisers were being ignored.

The view was echoed by former Wallaby Drew Mitchell who lashed out at Folau's "greed" and blasted the winger for bringing about his own downfall.

It’s no longer about religion, it’s about YOU and YOUR greed.@IzzyFolau 🤦🏼‍♂️ pic.twitter.com/mdywzaw1ha 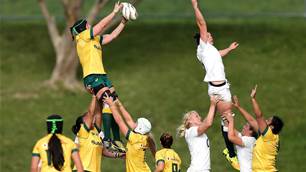