Valentine Holmes has made history as the first player to score five tries in a World Cup.

The Sharks and Maroons flyer was in everything as he helped the Kangaroos down Samoa 46-0 in the Darwin quarter-final.

Captain Cameron Smith kicked seven from eight conversions, however, the night belonged to Holmes who gave his club coach Shane Flanagan plenty of food for thought for a switch from fullback to the wing.

And with the impending arrival of Australian team mate Josh Dugan in the Shire, Holmes could switch to the flank despite being hell bent on staying at the back.

Holmes’ tries included a full-length effort in the first half was well some superb backing up in the vein of the great Billy Slater.

"It is a huge honour to break the record and I am pretty happy with that," Holmes said.

"It was a hot night up here but both sides had to deal with it."

The Kangaroos will face the winner of tomorrow’s match between New Zealand and Fiji in next week’s semi-final. 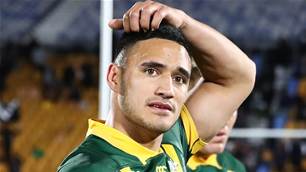 Holmes: I've been thinking about the NFL for two years 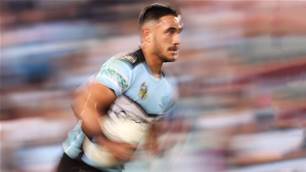