Just who will ultimately settle into Luke Priddis’ old hooking role at the Panthers? Plenty out west reckon it’ll be young Masada Iosefa.

Just who will ultimately settle into Luke Priddis’ old hooking role at the Panthers? Plenty out west reckon it’ll be young Masada Iosefa. 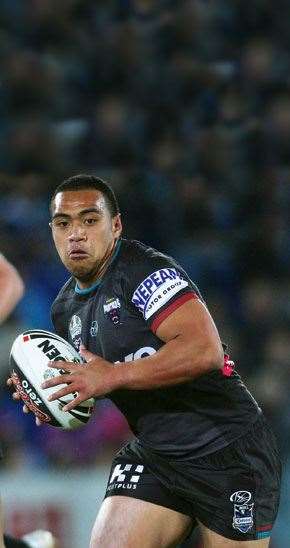 When Penrith Panthers stalwart Luke Priddis bid farewell to the club at the end of last season, he took 285 top grade games’ experience with him. Thankfully for the mountain men, though, competition for his hooking spot couldn’t be hotter, with three ultra-talented youngsters putting their hands up since Priddis’ departure. Livewires Paul Aiton and Keith Peters are in contention, but the man many are tipping to permanently fill Priddis’ number nine jumper is Masada Iosefa.

If you were an under-20s Toyota Cup player in 2008, you’d know exactly who the 21-year-old is, and what he’s capable of. Kiwi selectors have known about him for a while as well. They flew him over to join New Zealand’s squad in time for their third Test against the Poms in England in ‘07 – even before he’d made his NRL debut … even before he’d played his first Toyota Cup game.Samoan-born Iosefa arrived in Australia with his family as a youngster via a three-year stopover in New Zealand. He played his first game for Rooty Hill in the under-8s and was hooked for life. “I was introduced to the game when we came to Australia by a neighbour who was coaching his son, who was my age. He took me on.”Years later (though not that many), the Blacktown City junior was a crucial part of Patrician Brothers Blacktown’s Arrive Alive Cup campaign, with the famous rugby league kennel going down to Endeavour Sports High 16-7 in the 2004 final. The result was disappointing, but the small screen exposure proved valuable. “We got a bit of TV exposure. It was kind of a taste of what the big time would be like,” he remembers.His closest brush with “the big time” arrived in 2007 when he was a key performer for the New Zealand under-19s side which beat the Junior Kangaroos 24-22 in Wellington. All that just days after his Panthers took out the ’07 Jersey Flegg title.Then he was called into the NZ squad touring Europe. The Kiwis were hobbling: 0-2 down in the three-Test series and wracked by injuries. He was working out in the Panthers’ gym when CEO Mick Leary broke the news that he and goalkicking Rabbitoh and Junior Kiwis captain at the time, Eddie Paea, were heading to the UK. “I thought Mick’s announcement would be about [Panthers hard man] Frankie Pritchard making his debut. So when I heard my name, it was kind of a shock. [Kiwis star] David Faiumu got injured over there. It was massive for me because I hadn’t even played first grade at the time.” Iosefa didn’t get to play for New Zealand on that tour in the end, but the thrill of being picked remains.

Iosefa isn’t built for speed, but he possesses plenty. He boasts a sackful of crafty skills, too, which easily leads any league observer to compare him to Wests Tigers dummy-half Robbie Farah. Iosefa’s happy with the comparison. He’s collected as much info as he can by watching some of the more established hookers in the game since his stellar Toyota Cup year in 2008, which saw him named in its inaugural Team of the Year. “Robbie Farah’s running game, Cameron Smith’s workload. I take bits and pieces from a lot of players. My strength is my running, so I try to add stuff to that.” His approach must be working. He not only made his NRL debut in 2008, but well and truly made his mark around the ruck with nine appearances in the top grade for the Panthers.

Iosefa didn’t enjoy the rosiest of starts to life, with the Mt Druitt youngster struggling to keep out of trouble in his teens, according to Peter Ross, a former teacher of his at Patrician Brothers Blacktown. “At 14 or 15, I had to tell him he would end up in jail … But to his credit, he knuckled down and put better people around him. He got out of the gang environment and come Year 12, he was a model student. A real role model,” Ross told News Ltd last year.Iosefa wholeheartedly agrees with Ross’ assessment of Patrician Brothers’ influence. “The school had a lot to do with the reason I’m here. They really concentrate on discipline. You couldn’t play unless you had all your work done. It taught me about working hard to earn things. I played school footy there and eventually we played in the Arrive Alive Cup. “It can be hard growing up out here. A lot of hard stuff can happen. A lot of the juniors here, especially those of islander background, are from Mt Druitt, so we kind of stick together. Football was kind of my ticket out of the jungle.”

AFLW Finals: What to Expect