Will the luck of the Irish come in hand? Will the French finally win it?

The Irish will be heavily favoured to top pool D and may be a potential dark horse of the cup. They haven't lost to pool rivals France in their past four outings and pipped the English by points differential to win a consecutive Six Nations crown. Recent form though has raised many eyebrows after suffering back to back defeats to England and Wales in recent warm-up matches. If the Irish can overcome the French they'll be expected to top the pool and would be in a prime position to qualify for their first ever semi-final appearance as they would be expected to avoid New Zealand in the quarters.

"Les Bleus" translated into English means "The Blues" but in the universal language of rugby it means "The Bridesmaids". After losing the 2011 final to New Zealand the French have lost a record three finals. They are also the only team to have made an appearance in a final and to have never won it (every other past runner-up has won the cup). It was a surprise to see them reach the 2011 final and to their credit they put on a brave and determined performance which almost got them an unlikely victory. French fans are wondering if this team has turned the corner after a disappointing Six Nations campaign. Victories over Scotland and England has the French ready to challenge the Irish for top spot and hold off a determined Italian outfit. Remember, no one wants to face the All Blacks in the next round.

Italy are sweating on the fitness of captain Sergio Parisse heading into their opening match against the French. Italy have managed to beat France in two of their last five meetings but did concede a heavy defeat to their rivals in this year's Six Nations.

One of the countries that are always labelled as "minnows" but the Canadians won't be in England just to fill the numbers.

This is a team with ten players plying their trade in major European competitions. For a team that is classified as a minnow they'll provide a tough contest but like Canada they aren't expected to mount a challenge for qualification. 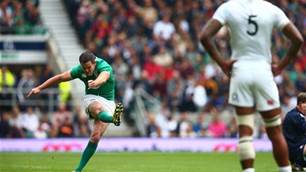 RANKED! The jerseys from the Final 16