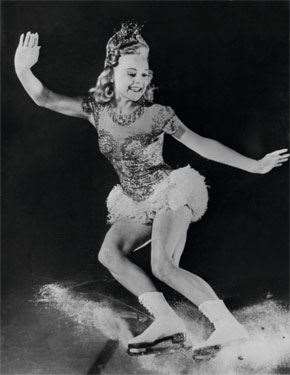 Sonja Henie was a true innovator who transformed the sport of figure skating from an exercise in technique performed by drably-clad men and women who cared little about entertaining their audience, into the dramatic combination of athleticism and gracefulness it is today. Then she took that sport into the mainstream via Hollywood movies and live spectaculars. Thanks largely to Henie’s pioneering ice shows, the spirit of showbiz became an essential part of sport, especially winter sport. Figure skating itself has been a blend of sporting performance and show for more than 70 years now, reaching its peak during the Torvill and Dean era.Henie won numerous Olympic Games and World Championship gold medals before single-handedly creating the concept of the sporting extravaganza: sporting performance as entertainment outside of the competitive arena.

As a child, she was a skating prodigy. When she was only 11 years old – and already a nationally-ranked tennis player as well as an accomplished equestrienne and swimmer – she participated in her first Olympics at Chamonix and enthralled everyone who witnessed her imaginative choreography and breathtaking technical skill.But her immodest short skirt, which allowed her to do the acrobatic jumps that became her signature while other competitors lumbered around in long dresses, appalled the priggish judges. She was a true succes d’estime, a cute-as-a-button whiz-kid who was beloved of the audiences, but who came dead last in the overall placings. One of her moves, a jump into a sit-spin, was unheard of at the time.Her dismayed and angry father, Wilhelm, a former world cycling champion, hired the famous Russian ballerina Tamara Karsavina to expand his daughter’s repertoire and accelerate her learning.

Three years later Henie leapt, spun and danced her way to complete supremacy over the sport, winning the gold at the 1927 World Figure Skating Championships. Olympic gold followed at St Moritz, Lake Placid and Garmisch-Partenkirchen.Her incredible reign included ten consecutive world championships. But at the height of her fame the IOC sought to ban her, as she was already starring in films, and the notion of working anywhere to earn a living was anathema to the lilywhite amateur community. Only the intervention of the Norwegian and American delegations allowed her to gain her third straight Olympic Games gold medal in 1936.Her use of dance choreography was unbeatable, and though talented young imitators emerged and challenged her supremacy, she was still able to maintain her hold over the sport until her retirement.

In 1936, immediately after winning her third Games gold medal, Henie moved Stateside and became a full-time entertainer. Despite her thick accent and lack of training as an actor, she was a Hollywood producer’s dream, and soon the tiny, blue-eyed Norwegian was the darling of America. Her live ice shows were, at the time, the greatest box office attraction America had ever seen. Only one of her movies during her 16-year acting career – 1941’s Sun Valley Serenade – was a “major” motion picture hit, but her popularity was enormous, and she was, back in the day, the highest-paid actress ever.Her fame attracted millions to her touring ice shows – compelling and unforgettable musical and skating extravaganzas produced by Arthur Wirtz – during the 1940s.

Henie was a complex woman, renowned for her bad temper, reviled for her unapologetic friendships with Nazis – including Hitler – and emotionally exiled from her own country, Norway, after her emigration to the United States. But in her way, she was also a compassionate and generous woman. At a show in Baltimore in 1952, a badly-erected tier of seats collapsed during the overture. Henie instructed the orchestra to play soothing classical music while she immediately set about helping the victims. At around 9.30pm, an anxious and impatient stage manager approached Henie: “We shall start the show now?” Henie glared at him with quiet rage and said, “You’re fired.” The show was delayed three days while Henie visited the victims.

Henie’s memory has been tainted by those Nazi associations, which those who knew her believed were possibly her way of protecting her family and their property in Norway in the years preceding, and during, the Second World War. Oslo eventually welcomed her back, and its Vigeland Sculpture Park features a beautiful bronze statue of Henie. And every day at 1.00pm, the Sun Valley resort in Idaho plays Sun Valley Serenade.