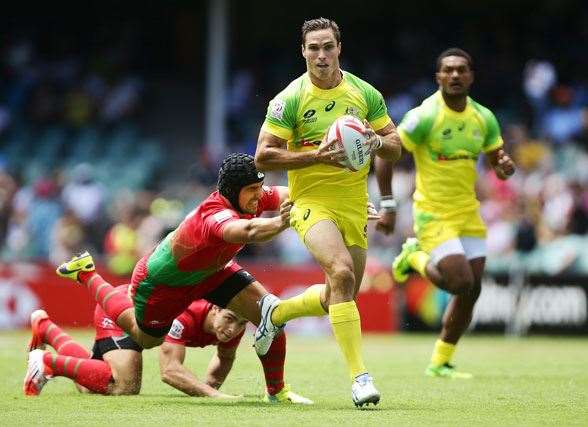 Australian captain Ed Jenkins in action during the Sydney Sevens in February. (Photo by Getty Images)

Skipper Ed Jenkins and star centre Cameron Clark return after being rested for the last round in Vancouver, while Con Foley is set to become just the second Australian to win 40 World Series caps when he takes to the field at the 40,000-capacity Hong Kong Stadium next weekend.

The in-form Australians have drawn a testing Pool C alongside Cape Town finalists Argentina, the USA and Portugal. Should the Australians qualify for at least the Cup Semi-Final stage in Hong Kong, it will be the first time they have reached the last four in four-straight tournaments since 2001.

"Hong Kong represents the perfect opportunity to continue the momentum we have been slowly building this season,” Qantas Australian Men's Sevens head coach Andy Friend said. “We're on a good run, but it's important we remain clinical in everything we do in both attack and defence.

"We are building a large pool of quality players that I believe will serve us well for the remainder of the season, which will create huge competition for places come the Olympics and beyond. We do, however, have plenty of hard work on our hands before we even begin to think about Rio.

"We have drawn a pool of teams in Hong Kong that will demand our respect. Argentina has already played in one Cup Final this season, while the USA can beat anyone on their day as they’ve proven against New Zealand on more than one occasion this season. Portugal is facing a fight to retain its World Series status next season and will come out hungry and be looking to turn us over."

Australia currently sits fourth in the 2015-16 HSBC World Sevens Series standings, 14 points adrift of third-placed New Zealand and ahead of the USA in fifth by the same margin.

Fans can catch all of the action from the 41st Hong Kong Sevens LIVE on FOX SPORTS Channel 503 from 3pm AEST on Friday.