The Walkinshaw outfit may have been stripped of its status as the official Holden racing team at the end of last year, but that hasn’t stopped the team from recalling its glory days as the Holden flagship in touring car racing for this weekend’s Sandown 500.

The Mobil 1 HSV Racing of Scott Pye and Warren Luff will wear blue and white Mobil 1 colour scheme reminiscent of the Tom Walkinshaw Racing/Holden Racing Team livery from 1994. This was the year Holden legend Peter Brock was reunited with the factory Holden team, after seven years in the wilderness which followed Brock’s split with Holden after his intransigent insistence on fitting a crystal ‘energy polariser’ device to his HDT/Brock Holdens.

Walkinshaw Racing finds itself in something of a wilderness of its own this year, with the loss of Holden support, and a season in which its drivers are currently placed a lowly 18th and 20th in the points.

But the new livery should buoy spirits ahead of the enduros, recalling as it does not only the glory days of the team but celebrates the long-term support of Mobil, which came on board along with Brock back in 1994.

The team’s general manager of motorsport, Mathew Nilsson, says the livery is all about honouring Mobil’s 24-year history with the team.

“To have the blue and white of Mobil 1 on the car is a real privilege. It’s something everyone in the team is really excited about, and something we hope all the fans will love,” Nilsson said.

“When you think about celebrating the history of Walkinshaw Racing for Retro Round, the blue and white Mobil 1 branded Commodore with Brocky at the wheel is one of the first things that springs to mind.”

The slightly provocative decision to incorporate what almost amounts to the iconic original HRT logo should also strike a chord with Holden fans unhappy with the team’s treatment by Holden last year. It should also please those Holden supporters dismayed over the fact that the new custodians of the Holden Racing Team moniker, Triple Eight Race Engineering,  dropped the famous Holden Lion/helmet image altogether. 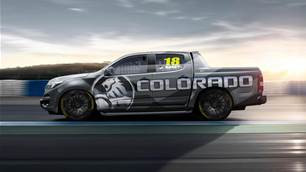