Ivan Capelli’s nine years in Formula 1 were compromised by ill-timed career moves and tragically misplaced loyalty. For all the Italian's undoubted talent and speed, it may well have been that he was simply too nice to be a successful Formula 1 driver.

Capelli’s last Formula 1 grand prix start was in 1993. But he’s been a familiar presence in the F1 paddock for much of the last two decades, as part of the commentary team for Italian TV. So Capelli’s been a frequent visitor to our shores in recent times, calling the action from Albert Park for the viewers back home in Italy.

He was in Australia last November to take part in the Adelaide Motorsport Festival, a motorsport carnival that celebrates Adelaide’s unique motorsport history and, specifically, the 11 years from 1985 until 1995 when it hosted the Australian Formula 1 Grand Prix at the Adelaide Parklands street circuit.

It had been a long time since Capelli last visited the City of Churches. More than a quarter of a century, in fact, the Italian having made his last start at the Parklands circuit in a Leyton House in 1990.

A lot has changed in 26 years. Even in comparatively sleepy Adelaide, as Capelli discovered when he arrived in town.

“I came here to the circuit and I looked at the pit entrance, I said ‘where are the grandstands, where am I?” he laughs. “I couldn't recognise the area from my memory from driving here!”

Capelli’s engagement at the Adelaide Motorsport Festival would be a reunion on several levels. Not only would the Italian be driving the 3.5-litre Judd V8-powered March CG891 he raced here in 1989, but he’d have contemporaries Pierluigi Martini and Stefan Johansson alongside, with Martini piloting his Minardi Cosworth 3.5-litre V8 from the very same year. Johansson would be aboard a Ferrari F156 1.5-litre turbo, from 1985.

“It’s quite emotional to be here,” Capelli says, “with the ‘89 Leyton House, and with Pierluigi (Martini), who is actually a good friend of mine. We started together in Formula 3 in Italy, and then we competed in Formula 3000 and then Formula 1. We have known each other 35 years.

“For us, it’s a very big party to be here. With Stefan, we were team-mates in Macau in Formula 3 in ’84, and we raced obviously in Formula 1 at the same time with different teams. And then later I met him several times because he was commentating for Swedish television and I was doing the same job for Italian television – which I am still doing.

Capelli’s career as a driver is very much a case of what might have been. There is no question as to his talent but, not unlike his fellow Victoria Park Sprint visitors Martini and Johansson, he was one of those F1 drivers who couldn't quite master the mysterious art of being in the right place at the right time. 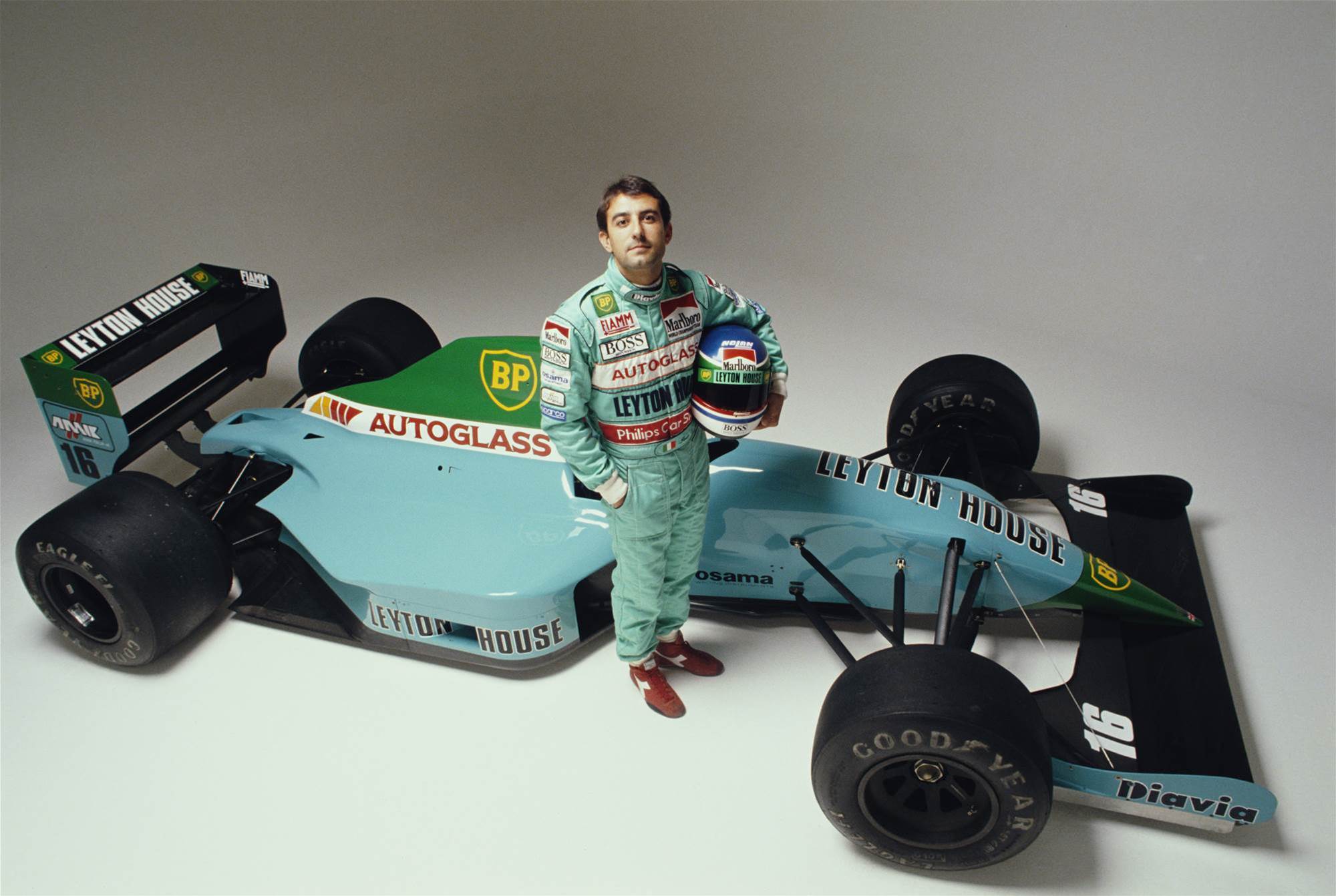 What no doubt also worked against the Italian in F1 is the fact that he’s a genuinely nice guy.

“Basically I was too loyal,” Capelli concedes of some his career decisions in F1. “If being loyal means too nice, then yes…

“When Alessandro Nannini had his helicopter crash in 1989, I was one of the drivers who received the phone call from Flavio Briatore to replace him (at Benetton).

“I said to Flavio, ‘look, I would like to, but I just signed a contract with Akira Akagi for the next season. I gave my word to him so I cannot do it’. Flavio said, ‘so you don't want to race for us, these two races this year in Japan and Adelaide, and all of next season?’

Briatore’s invitation must have been tempting. By the late ’80s Benetton was clearly a team on the rise; in ‘89 it was best of the rest behind Ferrari, Williams and McLaren.

In the end, Capelli’s admirable loyalty would prove spectacularly misplaced.

Akagi’s 1987 purchase of the March team had been seen as a Godsend for the perennially cash-strapped outfit. But before long the renamed Leyton House team was itself under financial siege as Akagi’s business empire went up in flames amid money laundering, scams and fraud in the Fuji Bank scandal.

Akagi and the Leyton House name were gone from F1 by the end of 1991; beleaguered March followed suit 12 months later.

It was a shame for all concerned, because March/Leyton House did have some good things going for it. Such as its technical director, a young aeronautics engineer named Adrian Newey.

Newey’s first F1 designs were criticised by Capelli and team-mate Mauricio Gugelmin for their uncomfortably cramped cockpits as Newey sought to maximise the aerodynamic efficiency by making the car as small as possible (a classic Newey trait still apparent in today’s Red Bull cars).

Newey’s 1990 car, the CG901, was better, though far from perfect. It was a kind of automotive equivalent of the Henry Wadsworth Longfellow poem, ‘There was a little girl’, because when the CG901 was good, it was very, very good, but when it was bad, as it was in Mexico that year, it was downright horrid.

In Mexico neither Capelli nor Gugelmin could extract enough speed from their CG901s even to qualify. By then Newey had already received his marching orders. He’d be off to Williams for ’91, and the rest, as they say (a total of 10 Newey-designed world championship-winning cars for Williams, McLaren and Red Bull), is history.

Seven days later at the French Grand Prix, Leyton House achieved what must be the most remarkable form reversal in the history of Formula 1.

Where the CG901 had floundered in Mexico, on the much smoother Paul Ricard circuit it was right at home, with Capelli qualifying seventh and Gugelmin 10th. At the time Capelli said it was the most perfect car he’d ever driven. Even better, it was proving very easy on its tyres. This lead team manager Gustav Brunner to go for broke with an aggressively bold tyre strategy – one which almost resulted in the upset of the century.

“The aim was to be gentle with the tyres in the beginning of the race,” Capelli recalls, “and then to start to attack and be really fast after the tyre changes of the other drivers.”

Sure enough, once all the other cars made their tyre stops, there were the two Leyton House cars running first and second, with only daylight behind them.

On the BBC television coverage, the late James Hunt assured viewers that it was just a stunt from the backmarker team (remember that from the previous six races, a Leyton House had failed to qualify six times, and the best result was Capelli’s 10th at Canada) aimed at grabbing some TV coverage by leaving their tyre change late, and the ‘real’ leader was Alain Prost’s third-placed Ferrari. But lap after lap the aqua cars just kept on sailing by the pits, running 1-2. Gugelmin’s car eventually went out with engine failure, and Prost was only able to nail Capelli three laps from home as his Leyton House began to likewise fail. Capelli finished second.

It would have the fairytale win to end all fairytale wins. It was and would remain Capelli’s equal best result in F1.

“When I look back on that, I think, that maybe… if only it was a few laps less!

“Winning that race might have changed the history of Leyton House and maybe Ivan Capelli as well. We were leading 46 laps, and the lap before the last my oil light was flashing and I had to back off to try to save the engine. But unfortunately Alain Prost, who was behind me, was easily able to overtake me, and I was able to finish still second with lots of problems in the engine.

“When I saw pictures with me in between Alain Prost and Ayrton Senna, thinking that just the race before in Mexico we couldn't even qualify the car… it showed how much Formula 1 back then was related so much to the interpretation of the drivers and the engineers, whereas now so many things are fixed.”

Out of the ruins of Leyton House, Capelli seemingly landed on his feet with a seat at no lesser team than Ferrari. He was replacing Alain Prost, who’d been sacked for describing the Ferrari 643 as a ‘horrible truck’ to drive, and that no one was listening to his input. In hindsight, that should have been a warning sign that Ferrari in 1993 was not a happy place to be. 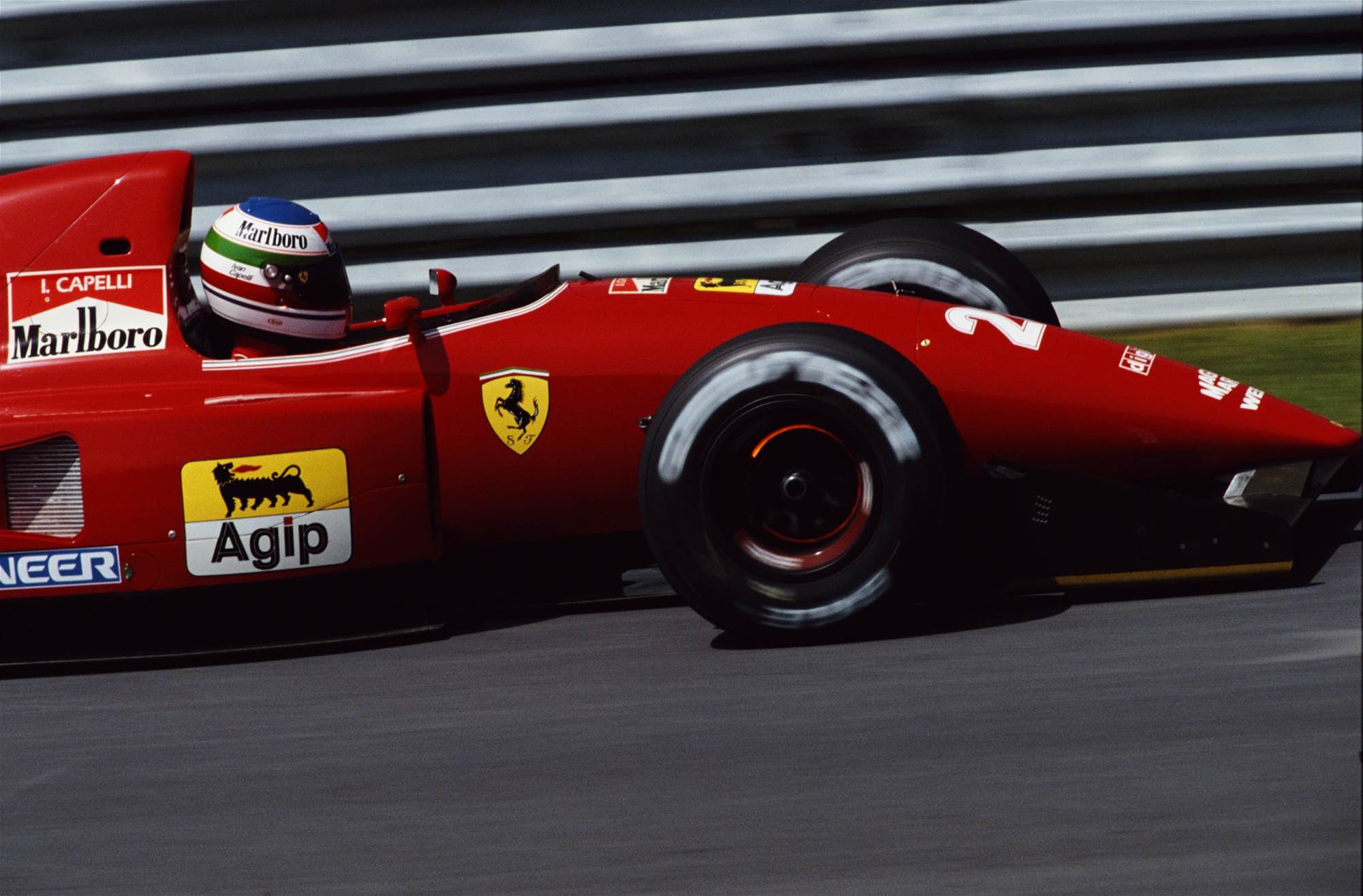 Capelli’s two seasons with the Scuderia were not memorable, to say the least.

A drive with Jordan and the smaller team’s more convivial atmosphere looked like just the thing to restore Capelli’s depleted stocks in 1993, but it was not to be.

He lasted just two races before being replaced.

“I was disappointed not to be able to choose my point of leaving Formula 1. I had to follow other peoples’ decision. Jordan told me, ‘Thierry Boutsen is bringing $700,000 more than you, but you can still have a drive if you are bringing to me one million’. After the ’92 grand prix here in Adelaide, I said to him, ‘no’.”

The Benetton offer for 1990 was probably the big missed opportunity, the one that might have made the difference. Instead, Capelli chose loyalty to a team owner who turned out to be not worthy of receiving it.

Through it all, though, Ivan Capelli at least can say that he remained true to his own principles.

“Now, thinking back, making different decisions might have changed my career,” he says. “I don't know, but I was and I am a person who is loyal to the people I am working with.”