Laurie Daley says Andrew Fifita is primed for a big game in tonight’s NRL All Stars match despite a controversy-filled off-season.

It will be Fifita’s first game back since being overlooked for the Kangaroos squad at the end of last season on the back of his public support for one punch killer Kieran Loveridge.

The 27-year-old was one of the best players in 2016 culminating in a premiership-winning try for Cronulla.

He was best on ground in the grand final but controversially missed out on the Clive Churchill Medal (Luke Lewis).

And despite talks of code-hopping and leaving the NRL after his Four Nations snub, Daley said Fifita was in good spirits.

“I don’t think there’s any issue with Andrew and he looks in really good shape," he said.

“I think he’s lost a lot of weight and trained really hard in the off season, so, if that’s an indicator I think he’ll have a big year.

“Ah he’s a different one and I think the boys have spent a bit more time with Andrew than what I have.

“He seems to be as good as gold so I think he will have a big game. I think he is excited to get out there and play well against a big All Stars team.”

Captain Johnathan Thurston said he expected Fifita to have a massive influence on the outcome of tonight’s match.

“He’s a big personality and you can hear him from anywhere,” he said.

“It’s like he’s certainly got his mojo back. He’s got a spring in his step when he’s walking around camp so no doubt he’ll be up for a big game.” 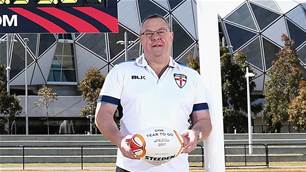