The last 10 years of fantastic finishes and epic encounters. 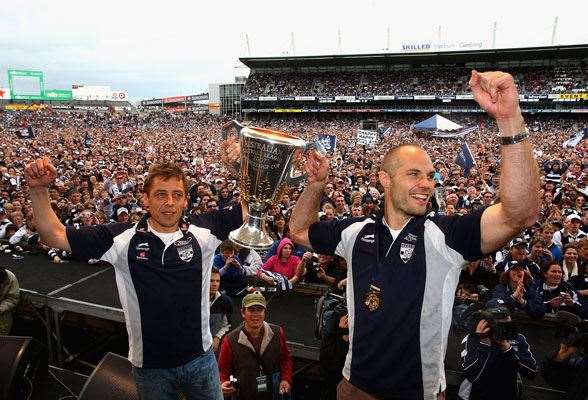 Sydney ended the Bloods/Swans' 72-year drought in one of the most epic finales in AFL history. Leading 58-54 with just seconds remaining, and with a long ball looming from the Eagles into the Swans' 50, Leo Barry pulled off the mark of the century, soaring above the rest to take a beauty of a "specky" and keep the Eagles at bay ... "Leo Barry you star" ...

For the second-straight year, West Coast and Sydney played out a cliffhanger. The Eagles began in much better fashion than in the decider the year before, and led the game at every interval; at one stage their lead was 25 points! The Swans dug deep, though, clawing back to within one point of the Eagles. But it just wasn't to be, as the West Coast boys held on by a single point to erase their heart-breaking memories of a year earlier.

3) Draw for the ages

St Kilda was looking to end a 44-year title drought, and after coming so close the year before (losing in the Grand Final to Geelong), the Saints truly believed THIS was their year and their time. Down by one point with only 90 seconds remaining, a long ball towards goal from Lenny Hayes took a dodgy bounce away from Stephen Milne, going through for a behind and levelling the scores at 68-apiece for just the third-ever drawn grand final. Sadly for the Saints, they were well beaten by Collingwood in the replay just seven days later.

The Swans and Hawks would go to battle for the first time on the biggest stage in AFL, and this contest was as good as any other Grand Final seen. It had everything - three comebacks (one from the Hawks and two from Sydney) and a thrilling finish, highlighted by Nick Malceski's left-footed snap with only 30 seconds remaining to settle the tie and hand the Swans their fifth flag.

Geelong was looking to end a 44-year premiership drought against Port Adelaide, while the Power was hoping to add to their only flag won back in 2004. The match was attended by over 97,000 spectators, who witnessed a rampant Geelong side - featuring the likes of Tom Harley, Cameron Ling and Gary Ablett Jr - trample the Power by 119 points, the biggest-ever Grand Final-winning margin in VFL/AFL history. They scored 24 goals along the way, the most in a Grand Final from one team.