Legendary rugby league commentator Ray Warren’s “barometer” for volume and excitement during a call is the crowd.

Legendary rugby league commentator Ray Warren’s “barometer” for volume and excitement during a call is the crowd. 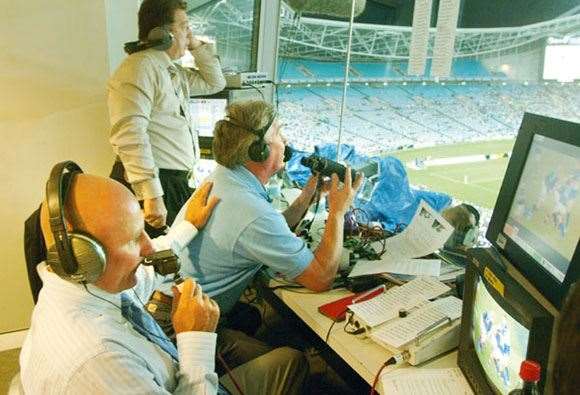 It’s why only “Rabs” could’ve matched the emotion of the away supporters as tryscorer Mark Coyne finished off Queensland’s famous 60-metre, ten-sets-of-hands passage in the 79th minute to clinch game one of the 1994 State of Origin series at the SFS. Over the top of his “barometer” that night, he famously bellowed of Coyne’s winning four-pointer, “That’s not a try, that’s a miracle!” No one has ever argued otherwise. And why would they? The 66-year-old voice of rugby league, who has also brought us descriptions of big-time swimming meets for years, has seen it all on the Origin stage, from gladiatorial contests in the SCG mud, to The King’s heroics, to Joey’s domination. It’s why Inside Sport decided to catch up with him in the lead-up to another thunderous interstate series to find out how close New South Wales is to stopping Queensland’s now four-year stranglehold of the annual showcase, which in 2010 celebrates its 30th anniversary.

Once, if a Queenslander played footy in Sydney, he used to be picked for NSW. What were your first thoughts back in the late ‘70s on the proposed system of players playing for the state in which they played their first senior footy?

I had great doubts about its success – the “mate against mate” thing. I couldn’t see how that could work. I was okay with “state vs state”, but the other side of the equation had me worried. But, like a lot of others, I was happy to sit back and give it a go, and thankfully a lot of people did.

Before the current Origin concept was introduced, they were moving the interstate match around all over the place, basically to keep it away from the public eye. The Queenslanders had long memories of the fact that NSW was importing players down here to play football for us. This was something QRL chairman, Senator Ron McAuliffe, despised and I think NSWRL boss Kevin Humphries agreed with him, even though he probably didn’t want to be too audible about it. But they eventually got together and said, “Look, this [the interstate lopsidedness – up to 1980, NSW had won 55 of 65 matches since 1961] has got to change.

Should State of Origin be played before or after the annual Australia vs New Zealand Test?

I still think Test match football should be the pinnacle, even though it’s probably not. The pecking order should be City/Country first – if we have to have it. Personally, I don’t know that it means what it used to. Providing it’s a full-on trial for Origin, then it’s okay, but I don’t think it is. Then should come Origin, it’s on a pedestal, and then the Test.

Fitting it all in before the finals is very difficult, though … Our international football used to be played after the end of the season. The Kangaroo Tour, where we’d tour England for a couple of months, always used to be played post-grand final, but I don’t think that’s ever going to find legs again.

What’s the best night of the week for Origin football to be played?

That’s an unsolvable problem. We’ve tried everything – Origin standalone weekends, we’ve played it on every night of the week … I think we’ve found it sits best on a Wednesday night. I had no problem with an Origin-only weekend. But then, I can still remember the people, the fans, screaming out, “Where’s our club football?” They were pretty loud in their voice and with good reason. I really feel sorry for the administrators who are trying to find the right place for it.