For Inside Sport’s April 1992 edition, respected rugby league writer Neil Cadigan wrote this feature about Peter Sterling. On the field, Sterlo’s act was squeaky clean. Off the field, it had been a different story.

Wednesday at Parramatta Stadium. Physical fitness guru Rowland Smith – the man many Eels believe to be either a maniac or a masochist – calls his troops in for the dreaded eight-lap time trial. The oldest and possibly the smallest of the 50 gathered players, halfback Peter Sterling, winces for a moment, then focuses his mind on the ensuing nightmare. He jokes that he doesn’t sleep for three days before one of these trials. He’s been belted by 100kg front-rowers, suffered the agony of three serious shoulder injuries, and played in five grand finals and 18 Tests – but this moment on the training paddock is as daunting and important to him as any of those games: more important now than last year, and the year before that.

For 14 of his 32 years, Sterling has had a fear: of quitting. He knows that during the time trial he will give himself the choice of dropping back a gear, of saying: "We'll only give it 70 or 80 percent this time and it'll be okay." 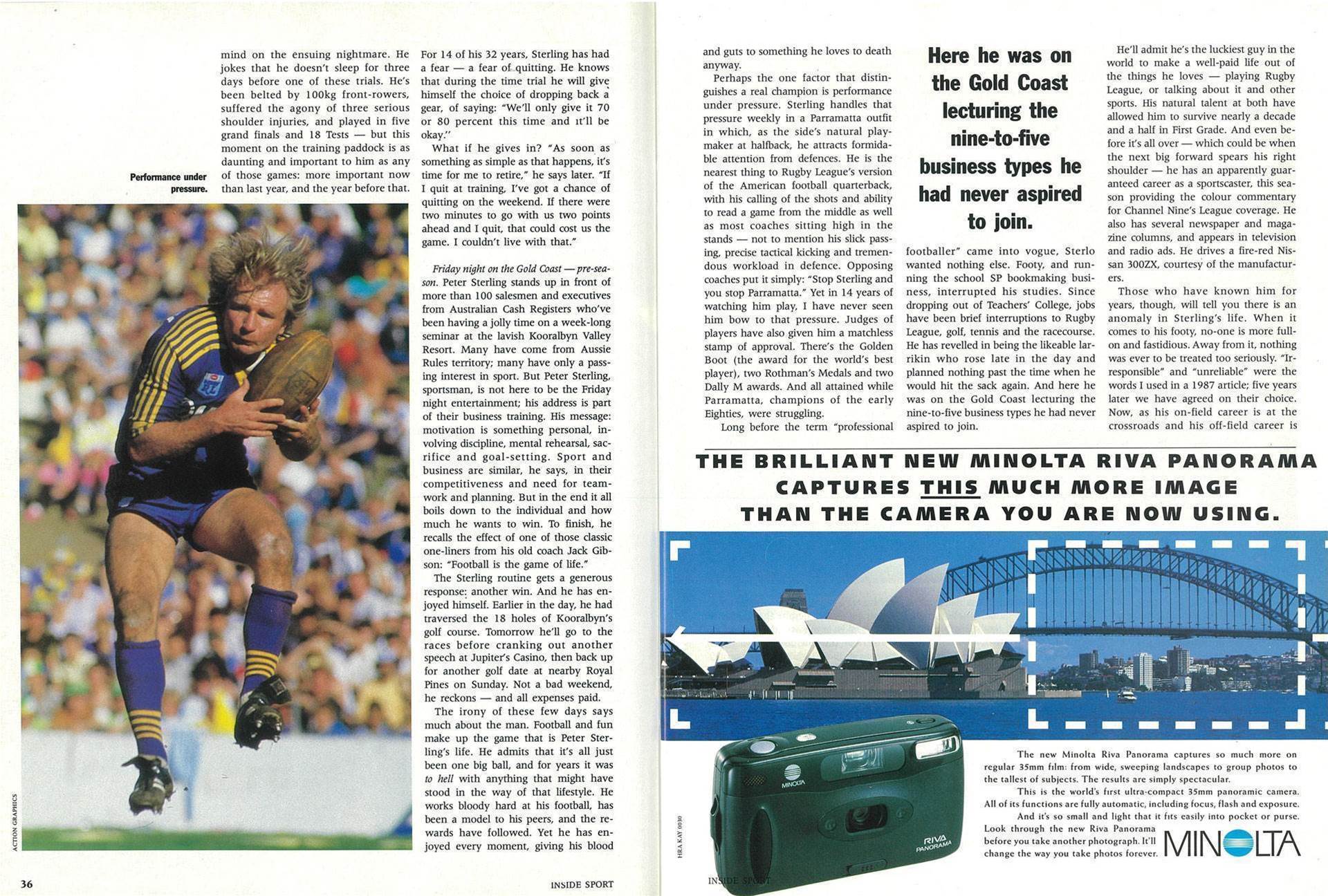 What if he gives in? "As soon as something as simple as that happens, it's time for me to retire," he says later. “If I quit at training, I've got a chance of quitting on the weekend. If there were two minutes to go, with us two points ahead and I quit, that could cost us the game. I couldn't live with that."

Friday night on the Gold Coast - pre-season. Peter Sterling stands up in front of more than 100 salesmen and executives from Australian Cash Registers who've been having a jolly time on a week-long seminar at the lavish Kooralbyn Valley Resort. Many have come from Aussie rules territory, many have only a passing interest in sport. But Peter Sterling, sportsman, is not here to be the Friday night entertainment; his address is part of their business training. His message: motivation is something personal, involving discipline, mental rehearsal, sacrifice and goal-setting. Sport and business are similar, he says, in their competitiveness and need for teamwork and planning. But in the end it all boils down to the individual and how much he wants to win. To finish, he recalls the effect of one of those classic one-liners from his old coach Jack Gibson: "Football is the game of life."