For many Penrith fans, the image of inspirational figure Royce Simmons embracing the Winfield Cup after fulltime remains the most powerful memory of the club’s finest moment. But it almost didn’t happen for the great man.

That day back in 1991, the 238-game veteran hooker - who had scored just 13 tries in his 12 seasons at Penrith – crossed for two heroic four-pointers to lead the Panthers to a stunning 19-12 win over the mighty Canberra Raiders, who had bested the mountain men in the decider 12 months earlier.

But injury spoilt most of Royce’s 1991 campaign, to the point where he began accepting the fact he just may not be a part of the high-flying Panthers’ semi-final push that season.

“That last year was a tough year for me,” Royce tells Inside Sport’s James Smith on the magazine’s weekly Dead In Goal rugby league podcast.

“What a lot of people don’t remember is, I did my ankle really early in the year and played the following week with it because we had a lot of injuries. And I damaged it a fair bit more the next week. I was out for several weeks, then I came back, played a game, done it again and was out for weeks again.

“I remember coming back and it was our last home game of the season, so it was my last game at Penrith Park ever. The first grade side was going really well. They were flying along, but I’d missed long, long periods with injury. I’d come back and played three or four reserve grade games. I came back to training. Gus came into the sheds and said, ‘Righto, it’s our last game at Penrith Park, and this is the side, and Royce will be leading us out – not as captain, but leading us out because it’s his last game here.’

“So I played that last game and we beat Balmain pretty easy. I found out that before Gus had told me, he had actually told the whole side that I’d be playing that last game at Penrith Park. He also told them, ‘And he’ll be playing every other game right through to the grand final as well.’ So that was a good confidence-booster for me, to know that was happening.” 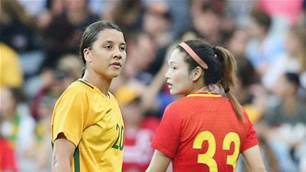 Matildas qualifiers in doubt: 'Chinese team will have to stay in isolation'