Schofield has taken aim at Meninga because Australia will not play Great Britain on their tour Down Under next year, with England not playing the world champions until 2020, and also accused Aussie fans of arrogance.

The controversial pundit, who played 49 times for the Lions and England, has claimed the Kangaroos are “running scared” because of their reluctance to host Great Britain in 2019 due to commercial concerns.

Meninga hit back at Schofield last week, calling the 53-year-old “the mouth from the north”.

On Monday Schofield responded on the Forty20 Live podcast: "Certainly now, our best 20 players can beat the Kiwis and can certainly beat the Kangaroos.

"I felt Mal’s comments were a bit babyish….Mal, I’ve got some cheese here, you are the mouse of the south. Bring your Kangaroos, all your little mice, up to north.

"You’re supposed to be an internationalist, but I tell you what Mal, you’re running scared.

"Australia think they can do what they want, but they can’t. They’re part of rugby league. Why aren’t the international federation telling them? They should be brought into line.

England lost the 2017 World Cup final to Australia but has beaten New Zealand three out of four matches this year.

"I was at the World Cup final last year and the Aussies are that arrogant that the fans didn't even wait in the ground to see the presentation of the World Cup to them," he said.

"Because they thought they were doing to win anyway. Well they just managed to win it, 6-0.

"But the Aussie fans, they're arrogant as well. They didn't even wait and celebrate the handing of the trophy to the winning side." 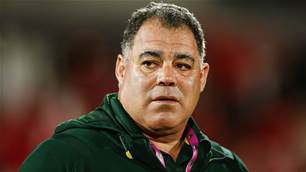