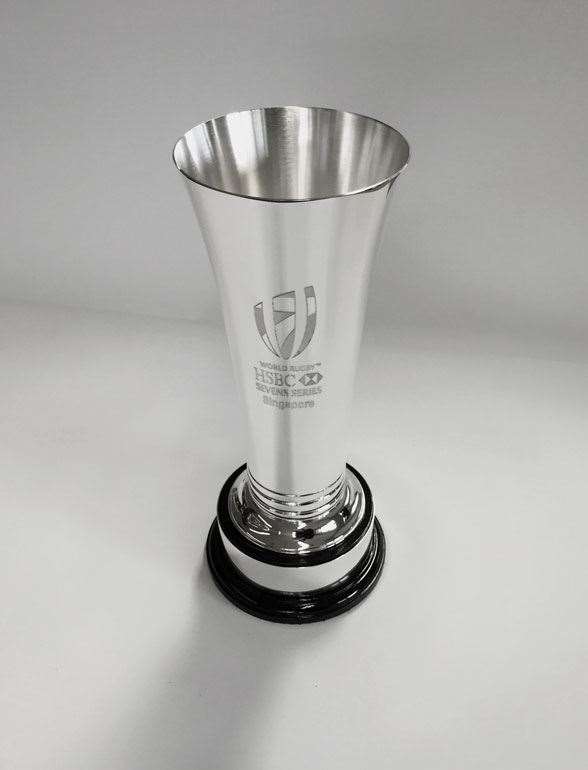 When the HSBC Singapore Sevens concludes this Sunday, a worldwide TV audience will witness the winners lifting a brand-new trophy designed and manufactured by world-renowned trophy maker and silversmiths, Thomas Lyte.

Thomas Lyte is one of the few establishments in the UK producing the finest silver and gold decor for the world of luxury. Their London workshops are responsible for designing and making trophies across the globe for the most recognised sporting competitions. In January 2015, Her Majesty The Queen appointed a Royal Warrant to Thomas Lyte as goldsmith and silversmith to the Royal Household.

Thomas Lyte’s affiliation with the rugby world goes back a long way and is built on years of experience and expertise in the craft of bespoke silverware. They designed and produced the trophy of the RBS 6 Nations Championship, an annual prestigious tournament played by six of the best European rugby nations. They were also appointed by Rugby World Cup Limited to maintain the iconic Webb Ellis Cup, which is awarded to the winners of the Rugby World Cup.

“It has been a pleasure to work with Rugby Singapore and to be chosen to supply the trophies and medals for the HSBC Singapore 7s. There can be no better venue for a tournament of this importance and I wish them well for a very successful weekend of great rugby,” said Andrew Jones, business development manager, Thomas Lyte.

Besides rugby, Thomas Lyte are also linked with other well-known global sporting events. They are the trophy makers of the FA Cup, the oldest association football competition in the world. They were also selected to design and make the trophy of the Barclays ATP World Tour, an annual season-ending tournament which is played by the top-eight-ranked male tennis players in the world.

“It has been ten years since Singapore last hosted a world-class rugby sevens event, and it is indeed exciting as we welcome the world to our doorstep, and this is looking to be a great tournament on and off the field. We are pleased to have worked with the craftsmen at Thomas Lyte, to produce a lasting prize that befits a tournament of this stature being held in Singapore,” said Mr Low Teo Ping, chairman of Rugby Singapore.

Besides the trophy, Thomas Lyte are also supplying silverware for the winners of the plate, bowl and shield finals. In addition, all individual winners and finalists of each event will receive a medal by them.

The trophy for the Singapore Sevens, standing at 38cm, is crafted by a team of expert silversmiths using traditional craft methods. The whole production process takes around 36 man hours, which includes casting, spinning, engraving and polishing. The design of the trophy is both contemporary and opulent. Its elegant structure is flared towards the top, with three decorative rings towards the base. While each trophy is designed specifically for the occasion, the Singapore Sevens trophy does have some resemblance to the trophies of the LV Cup and the Guinness Pro 12.

Besides the Singapore leg, Thomas Lyte will also supply the trophies and medals for the London Leg of the HSBC World Sevens Series.