Typhoon Hagibis will hit southern Japan on Saturday which has resulted in two matches being cancelled. The All Blacks game against Italy, in Toyota, and England and France’s Pool decider in Yokohama have both been cancelled on safety grounds.

With winds of 260kph and heavy rain due to hit land on Saturday, resultant transport cancellations have put the area on lockdown. As a result of the game cancellations, there have been many criticisms levied at World Rugby.

In their announcement, World Rugby said, ‘The decision to cancel matches has not been taken lightly and has been made in the best interests of public, team, tournament personnel and volunteer safety, based on expert advice and detailed weather information.’ It is clear that World Rugby, and the organising committee, had no choice but to cancel the games with venues right in the path of a destructive storm. Also, the tournament rules state that any games not played on their scheduled date would be treated as a scoreless draw and one point each would be awarded. However, allowing for a reserve day may have been a more palatable option.

Although Japan is outside of their typhoon season, they are still prevalent at this time of year. Just last month, Typhoon Faxai caused much damage and led to flight cancellations and thousands of passengers stranded at Tokyo’s Narita International airport.

The All Blacks versus Italy game was not going to change the look of Pool B but robbed Italian hooker Leonardo Ghiraldini of a farewell match for the Azzurri. There were unsubstantiated rumours that the All Blacks were refusing to play the game. England and France’s match was a decider for the winner of Pool C but the drawn game hands England the top slot and a quarter-final, in Oita, against the Wallabies next Saturday.  It will mean that England will have had a two-week break between games.  They will undoubtedly be fresh, with injury concerns given more time to recover, but might not be as match-sharp due to the extended layoff.

There is yet to be a decision made on Sunday’s games. An assessment will be made on Sunday, once Hagibis, has passed. There are four matches scheduled for Sunday with Japan and Scotland’s effective play-off being the most contentious cancellation should it happen. The game is due to be played in Yokohama, and storm damage could make cancellation the only option. The winner of the match will make the quarter-finals, but a draw would put home nation Japan through.

Scottish Rugby Union has already made representations about legal challenges if the game is cancelled. They are arguing that the normal tournament rules do not apply in the event of Typhoon Hagibis. It is difficult to see how a legal argument could be won with the quarter-finals being played next weekend. The furore over the possible cancellation is casting a shadow over an enjoyable and entertaining Rugby World Cup.

First and foremost, let’s hope that Hagibis safely passes without too much damage to Japan. Once it has, the authorities will need to assess and rectify the damage. Once the cleanup operation is underway, World Rugby need to make a call on the games based on safety first. Once the tournament has finished, and World Rugby is looking back at what went wrong, tournament rules around weather affected matches must be high on the agenda for France 2023. 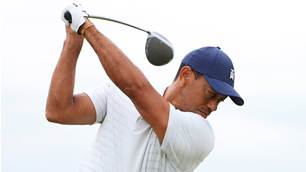 Woods aims for historic No.83 at ZOZO