While Whincup gave no indication that he is intending to retire from driving in the near future, the 35-year-old’s move into part team ownership is clearly aimed at establishing a new career once he does decide to hang up his helmet. Right now he is confirmed as driving for the team for at least the next two years.

Currently Whincup is third in the championship with two rounds to go. Trailing team-mate Shane van Gisbergen and Ford rival Scott McLaughlin by a substantial points deficit, Whincup retains only a slim chance of defending his championship crown this year.

“The guys and girls at Triple Eight are like family to me and if it’s my choice, I will keep racing with them until I am 80 years old,” Whincup said.

“My motivation to be a team owner has risen from the fact I simply love the concept of motorsport. I want to ensure that I’m still racing well after my driving career.”

Jamie Whincup has raced for Triple Eight Race Engineering since 2006. All of his seven championship titles, 113 championship races, including four Bathurst 1000 wins, have come with the team.

Triple Eight originated in the UK in the 1990s and shifted from the British Touring Car Championship in 2003. Within two years the team had emerged as the dominant force in Australian touring car racing, a position it has more or less maintained ever since.

Triple Eight co-founder and managing director Roland Dane welcomed the addition of his driver to the ownership structure.

“Jamie has proved over the years that he is a team player and has Triple Eight’s best interests at heart," Dane said. "Just as in racing, it’s vital in business to be planning ahead for every scenario and the boys and girls here at Triple Eight recognise that he potentially has a lot to offer in this respect.

“Jamie and I have been working on a plan for him to come into the business side of the team for a few years, so to see this start to come to fruition now is very satisfying. I’ve no doubt he’ll put every effort into learning as much as possible about the running of Triple Eight as he can to make sure that his contribution is valuable.” 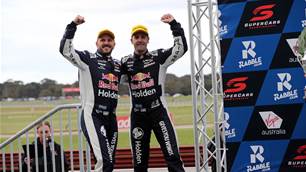