The women send out a strong message, the men have work to do.

The first event of the World Rugby Seven's Series for both men and women was contested in Dubai. With all eyes focused on the Rio Olympics, teams were using this tournament as vital preparation in their quest for gold. Australia fielded teams in both tournaments but it was the women who outshone their male counterparts. The Pearls stormed their way to lifting the Cup, beating Russia 31-12 in the inaugural final of the season. The Thunderbolts were left to fight it out for the Plate after getting knocked out by eventual champions Fiji in the Cup quarter-finals. They managed to qualify for the Plate final but weren't able to overcome a tough South African side, placing the Aussies in 6th position. Check out some of the best snaps of the first event of the 2015-16 World Rugby Seven's Series in Dubai! 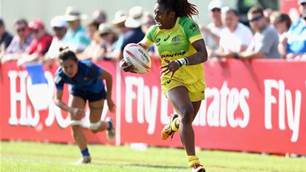