The Bathurst 1000 at Mt Panorama for many drivers and pundits is the pinnacle of motorsport in Australia. It can be one of the most rewarding and unforgiving tracks in the world and Ford's Chaz Mostert has experienced both the highs and lows of what Mt Panorama has to offer.

After winning the 2015 Bathurst 1000, Craig Lowndes entered an elite class of multiple winners of Australia’s most famous V8 race. The six time Bathurst champions name is now categorised with the likes of Mark Skaife and Peter Brock.

Last year’s race should have been a celebration of a racing legend. However, despite the magnitude of Lowndes’ win, it will forever be overshadowed by a sickening crash during the qualifying rounds that left Chaz Mostert hospitalised and his season in tatters.

A horror crash that went viral around the world left Mostert with a broken leg and wrist and also injured seven others in the process, which was an error in misjudgement according to the man himself. 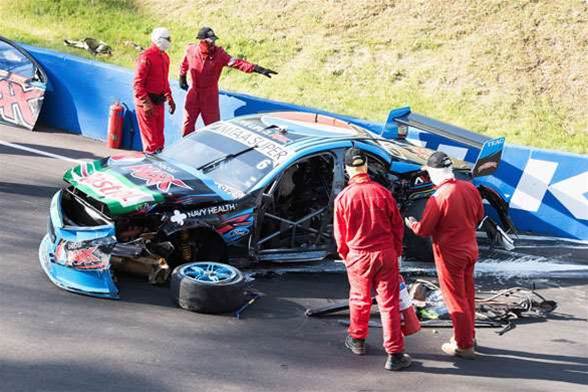 “I’d never qualified well at Bathurst in my two previous starts before 2015, so I put a bit of pressure on myself to qualify and make the Top 10.”

“Unfortunately I just made a misjudgement and wrote myself not only out of Bathurst but for the rest of the year,” Mostert told Inside Sport.

Mostert left the Mt Panorama circuit in 2015 being airlifted to hospital, in contrast to the previous year where the Ford Prodrive Racing motorist left Bathurst with the Peter Brock Trophy.

In the most bizarre, chaotic and frantic Bathurst races ever witnessed, Mostert and co-driver Paul Morris started the 2014 edition of the race from last position.

“Red flag in the middle, stopping for an hour for a pothole and all the safety cars … it was a crazy day,” Mostert said.

With Whincup trying to conserve fuel, the younger more fearless Mostert made his move at Forrest Elbow, the same place where a year later it would cut his Bathurst title defence short.

“It was crazy trying to chase Jamie (Whincup) down, when he was trying to conserve fuel and I was putting the pressure on him.”

“But I managed to pass the champ and somehow pulled it off.” Mostert told IS. 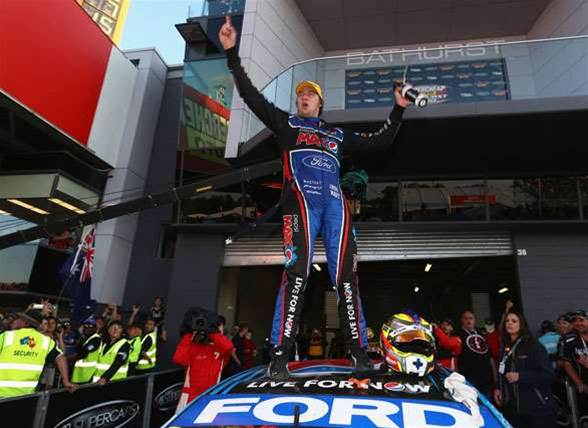 Creating history by coming from last to first in a race full of carnage, the unknown Mostert became an instant Bathurst legend, where he was able to etch his name on the famed Peter Brock Trophy.

“Absolutely awesome to be 22-years-old and holding the trophy named in his honour is something I can’t describe with words.”

With an up and down Bathurst career so far, Mostert has only one thing on his mind ahead of the 2016 edition, redemption.

“I just have to think of it as another track and keep building on our momentum, making the car stronger and do what we have been doing the last couple of rounds.”

Although Mostert believes after his two previous Bathurst events this year could be a repeat of 2014.

“My whole Bathurst experience is a bit up down up down at the moment, so I’m due for an up this year but I just want to get in their do the job and hope everything goes to plan.” 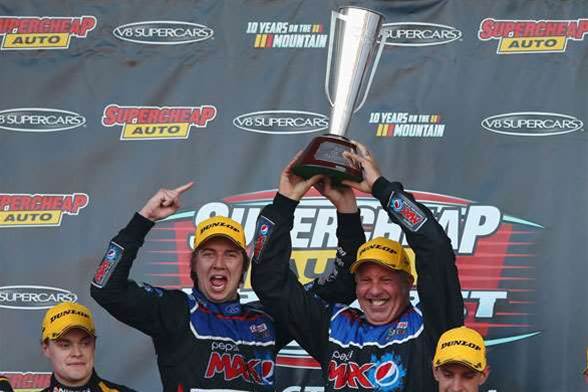 Chaz Mostert and Paul Morris hold aloft the Peter Brock Trophy as winners of the Bathurst 1000. (Photo by Getty Images)