Roberts joined the CA Board in 2012, and in 2015 relinquished his position to assume an executive role at CA with responsibilities for strategy, people & culture, technology, female engagement and member services, in addition to the One Team transformation program. In May this year, Kevin was promoted to the new role of Chief Operating Officer.

Prior to joining CA, Roberts was CEO of 2XU, an Australian-based multinational sports apparel company as well spending several years with the adidas Group, initially as Managing Director in Australia and ultimately as a Global Senior Vice President based in Germany. Either side of his tenure at adidas, Roberts led business transformations at Colorado Group/Fusion Retail Brands and Canterbury International.

He has also previously held non-Executive Director roles at Netball Australia and the Australian Sporting Goods Association. He is a former professional cricketer who represented Australia at youth level, played 23 first-class matches for New South Wales and worked as a development officer and a coach. Kevin is a father to five daughters who all play cricket.

Roberts will step into the role as Australian cricket faces several challenges including the need for improved facilities and to provide more personalised experiences to connect with fans.

These challenges, along with a rapidly changing media landscape, competition from other forms of sport and entertainment and the need to unite and build trust with the entire Australian Cricket community, in arguably the most significant period of change in the history of international cricket.

“Our position within the Australian community and as a representative on the global stage is key to our success," said CA Chairman David Peever.

"Kevin is the best candidate for our organisation and has been given a clear mandate by the board to deliver our strategy to ensure cricket maintains a strong and sustainable foothold in sport locally and globally.

“Given the complexity of the role and the increasing challenges facing our sport, the board concluded that an internal candidate with first-hand experience driving strategic transformation and engagement at CA would be best placed to help ensure continued success for Australian cricket.

“Kevin’s vast corporate leadership experience within Australia and overseas, his leadership of the development and implementation of our strategy, his demonstrated ability to lead change through the One Team transformation, and his deep pedigree in cricket both on and off the field, outline why Kevin was identified as the best candidate from a very strong list.

“Kevin will continue to focus on the implementation of our multimillion dollar investment in community cricket, along with leading our commitment to create the best participation experiences to be the leading sport for women and girls.

“It is a great opportunity for a new Chief Executive Officer to lead the organisation through its next exciting phase." 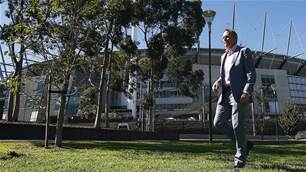