Nobody said Innovators had to be good guys. When a bloke comes along and, with one stroke, alters long-established rules forever, 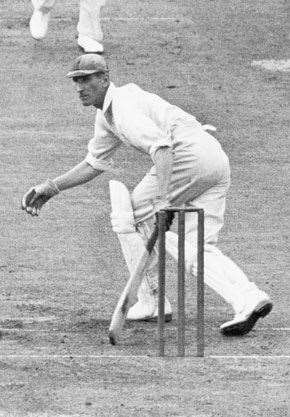 Nobody said Innovators had to be good guys. When a bloke comes along and, with one stroke, alters long-established rules forever, curtails a sport’s greatest practitioner, wins a series of matches he set out to win and goes down in history (his invention branded forever with a single word, “Bodyline”, still uttered with a mixture of awe and disgust), you have to call him one of the game’s great innovators

Douglas Jardine asked questions and forced us to answer them. Not the greatest practitioner himself (but better than most think), he proved that with the imposition of sheer intellectual will, he could manipulate the game of cricket and force it to address some of its greatest ambiguities.

Jardine, English captain during the 1932-33 Ashes series, employed a tactic considered contrary to the “spirit” of the game, designed primarily to inhibit the unstoppable Donald Bradman, but also to cow the entire Australian team into accepting abject defeat. Also called “leg theory”, Bodyline, as it came to be known, involved fast bowlers pitching short, at the body of the batsman, on the line of leg stump. The aim was to give batsmen no option but to defend themselves – and try to score – by deflecting to a leg side loaded with fieldsmen.

He was actually of Scottish stock, but let’s not let that get in the way of a good myth. If Aussies were given the opportunity to create a Pommy with every Pommy trait they despised, just for the purpose of bowling bouncers at him while he defended himself with a swizzle stick, that man would end up being Douglas Jardine. His angular features and superior attitude were typical aristocracy. He was born in India, of the Raj, educated at Oxford. He never hid his distaste for Australia and its inhabitants – players or spectators.

The story of his formulation of leg theory only confirms our judgment.

He studied film of a Bradman double century at The Oval in 1932. During the innings, after rain, Bradman batted uncomfortably for a period as the ball erratically popped up off a fuller length. Despite the fact Bradman went on to 232, and pitch conditions had changed radically, Jardine’s judgment was harsh: “I’ve got it! He’s yellow!” There was plenty about Bradman which Jardine reviled, apart from his Australianness.

There was a prevailing belief that Bradman was “vulnerable” against good pace bowling. Of course good bowlers got him out – eventually – and bad ones didn’t. Jardine’s spy was English batsman Percy Fender, who first detected Bradman’s flaws and later showed Jardine correspondence he’d got from the colony regarding the Australian season. Bradman had again displayed discomposure against pace, and some of our top batsmen were showing pronounced movement across the stumps for leg-side shots.

Jardine did his research. He spoke with many people. He went to Nottinghamshire and workshopped leg theory with its two pacemen, Harold Larwood and Bill Voce. They practised it for the rest of the season, with mixed results. He also spoke with two “pioneers” of the tactic: George Hirst, who employed it on the 1903-04 tour of Australia, and Frank Foster (1911-12).

Jardine arrived hostile and uncooperative to our press. His disdain was apparent. There are varying accounts of his intentions. He found that Fender’s assessment of Australian batting technique was correct, and it gave him no choice but to load up the leg side. However, in the lead-up games to the Tests, he also noticed Bradman had scored a meagre 103 runs in six innings.

After the teams split the first two Tests, leg theory was employed. But let’s get our history straight: it was not the cause of Bill Woodfull first being hit by Larwood. It was employed immediately after he went down, after an audible “well bowled Harold” from Jardine (aimed at Bradman, at the non-striker’s end). Woodfull copped many subsequent bruises. Later, Bert Oldfield got his skull fractured. However, this was also not the result of a “Bodyline” ball.

Still, the tactic was employed conspicuously, and retained. The implications for the game were obvious. The details are ugly. Bradman’s ingenuity was tested, and he averaged a mere demigod’s 56.57.

The MCC and the Australian Board exchanged heated cables. The Australian government feared, believe it or not, the implications of British trade sanctions if we complained too much.

The spirit of cricket is an elusive, fabulous thing. We’ve seen it all, really: intimidation, cheating, physical threats, go-slows. The fact is that, unless it’s legislated, it’s fair game. Bodyline became

a byword for unsportsmanlike conduct, and rules governing leg side placement and intimidatory tactics were altered and clarified.

Jardine played 22 Tests, and his only century was an ironic statement. The West Indies employed leg theory against his team. Jardine, annoyed, told his batting partner, Les Ames, to give him strike. A tall man, he played back, dead-batting every ball up on his toes. He batted five hours and blunted the attack, effectively, as he put it, putting an “end to this nonsense”.  The match was drawn and public opinion turned against the tactic, which had been employed by both teams.

No one can question Jardine’s captaincy record: 15 Tests, nine wins, five draws and a loss. As

the archetypal “Pommy bastard”, his legacy is assured – at least in this colony.