So could these two surpass, say, the Gregan-Larkham combination?

I think so. But look at Gregan and Larkham: they had a few handy blokes in front of them like John Eales and Richard Harry and Toutai Kefu. I think as long as the pack stands on an equal footing with the other mob, Genia and Cooper certainly have the potential to be the equal of anything that’s gone before. 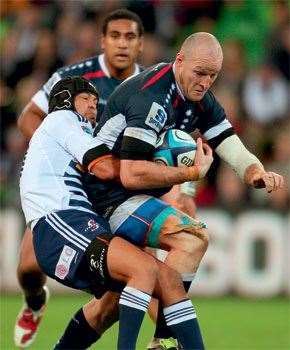 This year you described Cooper as the architect, Genia as the engineer and the Queensland Reds pack as the bricklayers. Do the Wallabies have the bricklayers?

Yeah, well ... potentially. There are a few guys in the pack who have got to prove themselves regularly at Test level. But the promise of the last 12 months would suggest these guys can prove themselves. And I’m talking about guys like Benn Robinson and Ben Alexander, the frontrowers. These guys have to improve every year. And they’ve been thereabouts over the past few years so, yes, I’m confident we do have the bricklayers. But I don’t think we can afford too many injuries in key positions. If we’re able to maintain our  top eight, with three or four reserves, then I think we can compete with the best teams and give Genia and Cooper and O’Connor and the rest of those guys space to move.

It’s been a common criticism of the Wallabies that they’re not an 80-minute team. Why is this? Is it a captaincy issue? A fitness issue?

I don’t think it’s fitness. If it is, then, boy, we really are struggling ... I think it’s a maturing issue. And sometimes that is a captaincy issue – captains have to learn to mature, too. When I first captained Australia we lost a very tight series to the All Blacks, and I think if I’d captained better we would’ve won that series. But that was my first bash and I’d like to think I got better. And I think that scenario encompasses the whole team. We’ve got young players who aren’t used to playing at Test-match intensity for 80 minutes. To use another sporting analogy, look at Bernard Tomic in the Wimbledon quarters. He was brilliant for a set or two, but when push came to shove he lost the plot. Well, it’s the same thing in footy. You might have 15 blokes on the field, but you only need one or two of them to have a wayward moment and you’re sunk. And I think that’s been the main issue ...

Look, there’s been no such thing as a certainty in the semi-final stage of the World Cup ... But you’ve got to go the All Blacks. Anyone who thinks the All Blacks aren’t favourites to win, well, I don’t know what their logic is. The All Blacks have got fantastic depth and I don’t think the pressure’s going to be a major issue. So they’re favourites. And the other final contender? Well, if I was born in Durban, I’d probably say South Africa, but I’m born in Brisbane, so I’m going to say Australia. And I don’t say that on a whim. The All Blacks are the clear favourites and we’re leading the pack of chasers.

Having captained the Wallabies at the ’87 World Cup, you must understand the pressures of being favourites in a home tournament. Is this pressure going to be an issue for Richie McCaw and the All Blacks?

To be honest, I’ve never understood this notion of the favourites being under pressure. Once he runs out on to the field, no footballer’s thinking about how the newspapers expect his team to win. I’ve never met a player who thinks like that. Perhaps other things can distract you, but I can’t see how everybody else thinking you’re going to win is one of those things. So I’ve never bought into the argument that favouritism makes it harder. Besides, in that ‘87 World Cup, I think the All Blacks were the clear favourites. Yes, we beat them