What about Sonny Bill Williams – the bloke’s a physical freak. Is he going to change the way the game’s played?

Well, I think all the players have changed a hell of a lot in the last five or ten years. A player like Sonny Bill has been developing for a while – he’s just the prototype. So, no, I don’t think he’s the Walter Lindrum of rugby; I don’t think he’s the bloke who’ll force the rule changes. I just think he’s part of an evolution. A big part of it ... The midfield’s just getting bigger and bigger and the blokes are getting faster and faster. I’m not sure how much longer teams can afford to have little guys in the midfield. In fact, I think that’s been proven already ... 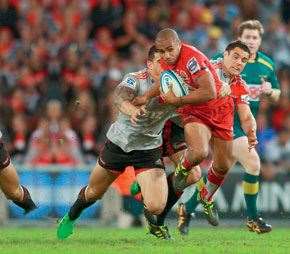 Andrew Slack reckons Will Genia is a player for all eras. Plenty agree.
Images: Getty Images

That doesn’t bode well for the Wallabies ...

Well, that’s one of our issues. And it’s one of the reasons why I wonder whether Stirling Mortlock will get a sniff at World Cup selection. Yes, James O’Connor’s a great player, and he’s enormously strong, and he’s probably best at inside centre, but I get the feeling these big guys eventually wear the smaller guys down. I see that as a real issue for us. Maybe the selectors could look at inserting Digby Ioane in there for some extra grunt.

Your first two Tests for the Wallabies were against Wales in ’78. Those matches are still renowned for their brutality. Any special memories?

I remember getting punched by some Welshman ... Look, that series got that reputation because Steve Finnane punched the Welsh prop Graham Price at the Sydney Cricket Ground earlier that year. He broke his jaw. In today’s world that would’ve been the end of the season for Steve, but back then that’s just the way it was ... But another side to those Tests is that we beat Wales at home. The Welsh were the Five Nations champions at that time and while Australia had been okay as a Test nation, we’d never been regular winners against the really good sides. So beating Wales at home really got the Wallabies’ ball rolling. I think that led to the ’84 Grand Slam and the ’91 World Cup. Those wins against the Welsh lifted our expectations.

Alan Jones must’ve been an interesting bloke to work with. Any memorable words from the man?

None that could be repeated in a printable fashion ... Alan’s obviously an orator – he’s always fascinating to listen to, even if you don’t agree with him all the time. I always remember this great speech he made before the Scottish Test on the Grand Slam tour. He created this story about the Romanian gymnast Nadia Comaneci and the gold medals she won at the Montreal Olympics as a 14-year-old. And the point of his story was this: when the world press asked her how she did it she said, “I just think about getting it right.” The point

was the “it”. Alan drew the comparison with every minute of the game we were about to play: get it right. Whatever the it is you are doing in any given minute, get it right. It was something that really stuck in our heads as we were playing that game, and it’s something that’s stuck with me ever since.

Any memorable blow ups from Jones?

Well, most of these rugby stories don’t really translate to print. But there was one moment on that ‘84 tour – we were in Cork – where we had a bunch of drinks and did whatever you did back then before getting to bed in the early hours. The next morning we had a meeting before we went to training and Jonesy was just screaming and yelling and carrying on. He gave us the biggest serve of the whole tour. And the theme of it was our bodies: you’re training so hard your bodies are sore! You’re playing so many games your bodies are sore! You don’t need to be downing copious amounts of grog and sucking down cigarettes because you’re body will get even sorer! The whole theme was that we don’t want sore bodies! It was full bore. Anyway, the meeting finished and we’re heading down to the bus when Chris Roche – Jonesy and he weren’t exactly the tightest pair – turned to me and said, “Mate, the only part of my body that’s fucken sore is my ears ... ” Very funny at the time.