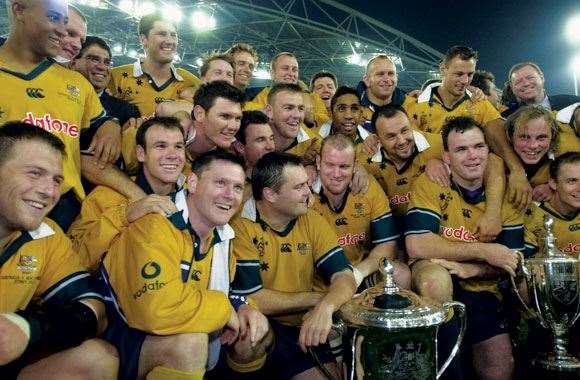 I last saw you in a photo at the World Track Cycling Championships in Melbourne, standing next to the great Anna Meares in your role with the Olympic team ... What do you actually do?

It’s a great role. Peter Montgomery and John Coates gave me the opportunity to do it in Athens. They used to have these “Winning Attitude” seminars, and they’d have people from outside the Olympics and Olympic sport come and speak to the potential athletes in group sessions. Herb Elliott started it – he was the first liaison officer with Dawn Fraser in 1996. Then Peter Brock came in to Sydney. Then it was myself, Russell Mark, Peter Brock and Robyn Maher in Athens, and then Steve Waugh came in for Beijing, and at this Olympic Games coming up it’s going to be Layne Beachley, Steve Waugh, Kieren Perkins and myself. And Laurie Lawrence is this kind of roving ...

Yeah. It’s a great role, it’s not particularly structured, but they assign us to different teams ... Cycling is one of my teams. I always try to meet them and spend a little time with them before the Games ... But then I tend to try to just carry the drinks or push the bags around or whatever it might be.

I imagine it proves a bit more involved than that at times. Is it your mere presence that has this calming effect? Have you felt like you’ve been really useful before?

Yeah, I have ...You’re there as a support. I don’t push myself on to people. It’s just important to be there – I don’t assume that my presence has any impact at all. But if you’re there, people are more inclined to come up and have a chat, and, you know, at times those chats have been, generally speaking, like, “Hey, I just won a gold medal, how do I protect myself? What do I need to do now?”

I thought your role was more pre-performance ...

Most of it is. You’re there to help in preparation. It might be a coach coming up to you and talking about a team dynamic, or a captain ...

Problems obviously do arise from time to time?

Yeah. They might approach and  ask, “We’ve got two big games in a row, what sort of things can we do to prepare ourselves?” A whole gamut of issues.

What’s more important there? Is it the example of your playing career, or is it your psychology degree?

Probably a hand in each bucket. I think the psychology degree more than anything else taught me how to structure my thinking.

Did you ever feel like you were a kind of closet shrink when you were captaining the Wallabies?

I couldn’t say I was drawing from Freud or Hans Eysenck or whoever it might’ve been, but I think we’re all a product of our experiences. I actually learned more about psychology from some of the great coaches I had, about dealing with people.Because, at the end of the day, I think in all those roles it’s more about how you deal with people and manage personal relationships and team dynamics, and you learn more from participating.