The Houston Rockets off-season has been, shall we say, controversial.

In just the last week, we've had GM Daryl Morey create an international incident between the NBA and China via a fairly benign tweet about the Hong Kong protests which turned NBA commissioner Adam Silver into surprisingly meek version of himself.

LeBron James perhaps inadvertently created a rift with Morey in his response to those events.

That doesn't even get into Houston owner Tilman Fertitta having to field questions about his wanting to pay the luxury tax and by extension his commitment to building a winner.

Coach Mike D'Antoni comes into the season without his chosen assistants or a contract extension. And of course (burying the lede) the Rockets acquisition of former league MVP Russell Westbrook from Oklahoma City.

For much of Morey's 12 years at the controls, he's advocated getting as many stars as possible. Once the Yao Ming and Tracy McGrady era faded, Morey pulled a blockbuster in trading for James Harden.

Since then he's seemingly been in Superstar Search mode: Dwight Howard and Chris Paul both yielded short term success before their partnerships with Harden fizzled.

Morey is betting the house (nine time hall of famer Chris Paul, two 1st round picks and two pick swaps) that the chemistry between the former Thunder teammates is better than Harden's previously arranged superstar marriages and negates a seemingly awkward on-court fit.

When you have superstar talent, that should trump any cohesion issues, right? Perhaps.

LeBron James & Dwyane Wade won a pair of titles despite a significant skill overlap, as did Steph Curry and Kevin Durant. But they were all adept off ball players, something that neither Russ nor The Beard have had to worry about in recent seasons.

Eight time All-Star Westbrook comes in as one of the most consistently high usage players in league history, despite sharing the floor with Durant for much of his prime.

On an individual level, Westbook has won an MVP and is second all time with 138 triple doubles – it would be churlish to say that his style has not worked. 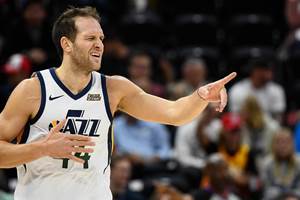 In February 2015, Utah Jazz made a trade that seemed odd at the time. In trading away starting centre and offensive fulcrum Enes Kanter for a first round draft pick, it looked like the Jazz were aborting their rebuild, only to enter another one

Harden has just come off one of the most remarkable offensive seasons in NBA history, averaging over 36 points and 7 assists, whilst taking the off the dribble three pointer to places Curry wouldn't dare.

His unstoppable step back has become THE signature move in the NBA. All huge accolades that point to one major issue: Both of these players have succeed with the ball in their hands. Harden's league leading usage rate of 40.5 is 2nd all time only to Westbook's 2016-17 rate of 41.7.

Sow how does D'Antoni remedy this problem?

Within the deep three happy Rockets offense, spacing is the obvious answer. Let's examine that.

Last season, Westbrook shot a relatively paltry 31.9% on catch and shoot three's. He attempted 2.9 per game – not a huge number, but enough to give a reliable sample size.

He's been known to chill in the corner, hands on knees, when not on the ball, although given his responsibilities in OKC it's tough to begrudge the man an in-play breather. Harden, on the other hand, shot 41.4%, but given the ball was always in his hands he attempted less than a single catch and shoot 3 per game.

The raw percentages lean towards giving Westbrook a little more control of the ball, allowing Harden to take some possessions off. In Houston, Westbrook will enjoy an posse of spot up shooters of a quality that he's never had before: Harden, Eric Gordon, PJ Tucker, Gerald Green, Danuel House and Austin Rivers.

But does D'Antoni really want to move away, even a little, from a Harden based half court juggernaut of an offense? Smart money says no.

So what is the solution?