Watching Liz Cambage get up and down the basketball court and fill the middle of the key for the WNBL's Bulleen Boomers, it’s hard not to think some things in life just aren’t fair.

Watching Liz Cambage get up and down the basketball court and fill the middle of the key for the Women’s National Basketball League’s Bulleen Boomers, it’s hard not to think some things in life just aren’t fair. 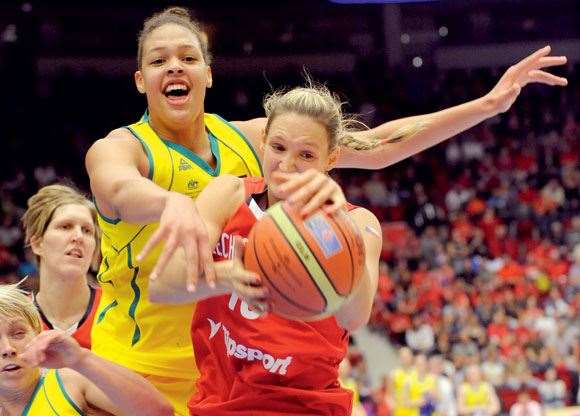 With a wingspan and height like Liz Cambage’s, life just isn’t fair for her opponents.
Images: Getty Images

As opponents – often as much as 15cm beneath her – hang from her limbs to curb the ever-growing stat-line of another monster game, the 19-year-old manages to put a mitt on an incoming ball and turn and sink a little baby jump shot – to the heartbreak of opposing coaches. Who needs the help of referees when you can do that?

Her ability to dunk, which has garnered some media attention recently, has many pundits excited. Will she be the first female player to throw one down on the Australian hardwood?

If you’re serious about wanting to see the Opals win gold at the London Olympics, then instead get excited about her soft hands around the basket, her ability to swat shots, her mobility and quickness, her growing confidence in the post and the improvements she’s making defensively this season under the tutelage of legendary head coach Tom Maher.

Last year the Boomers lost the WNBL grand final to Canberra, helmed by the current Opals head coach Carrie Graf. At the mid-point of the 2010/11 WNBL season, the Capitals and Bulleen sit one and two yet again. This year Cambage is just a little better, a little stronger and a little wiser, and a lot more focused on taking a title. The reason for that is she may not be around to have a crack at another one.

At the recent 2010 FIBA Women’s World Basketball Championships, Liz Cambage officially landed, and the world tuned in. She led the Opals – who boasted the likes of Lauren Jackson and Penny Taylor – in scoring, averaging more than 13.6 points per game.

When the Opals were down, she offered a great target inside, and in their quarter-final loss, where nothing seemed to go right for any of the marquee names, Cambage single-handedly kept them in touch, finishing that encounter with 22 points and 10 rebounds.

Since then, many have speculated about her Women’s National Basketball Association (WNBA) stocks for next year, with predictions placing her in the first couple of picks. The question is will she be ready for the step?

On the surface it seems she’s reached the pinnacle of the local game and stepping up to the WNBA is just the logical progression.

But at 19, her game is only just starting to ripen, and there’s every chance a premature contract in the world’s toughest competition may do damage to an illustrious career in waiting. If timed well, she could instead be delivered to the States a pre-packaged star.

There ‘s much she still needs to develop. Her defensive skill set is improving, but is still a work in progress; at times at the World Championships her footwork and spacing on the floor allowed opponents to penetrate and find the open shooters.

She has a young basketball mind and is still getting used to being beaten up night in and night out ‒ something that will definitely lift a notch in the physical WNBA. This is part of the reason many would like to see her stick around for one more year, so she’s ready when she pulls on a WNBA uniform. Ultimately the decision will rest with her. 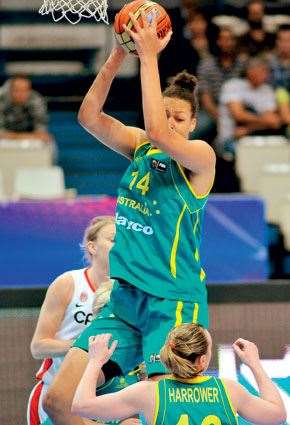 It’s hard to find a match for Cambage on the women’s side of the sport. A 203cm frame with superior athleticism is a rare commodity in men’s basketball, let alone women’s. As an example, Lauren Jackson is tall on the floor at 196cm, and Cambage is another notch above her in size.

There have been numerous comparisons made with the world’s best player, as they both play in the post and rebound well. But Jackson is more a versatile forward who can play inside and outside, an attribute commonly associated with the handful of players considered the best of all-time, such as American superstar Lisa Leslie.

Cambage, however, is a rare legitimate centre with the mobility to really dominate unlike anyone before her. Instead, her potential is probably better compared with a handful of players on the men’s side of the sport; she could develop into a player of the quality of two-time NBA MVP Tim Duncan, with the dominating potential of a “Shaq”.

What is certain is that the next couple of years are critical for Cambage in her development, and come London 2012, with the likes of Jackson and Taylor at the peaks of their careers, the addition of a polished and experienced Cambage will provide a devastating mix of talent in a team trying to achieve something that’s never been done before.

What do they say?

“It’s because of the limitlessness of her potential that it’s easy to see what she could do rather than what she does get done. She’s learning how to get beaten up a little bit better – that’s part of maturity for a big player. She’s starting to move without the ball better and she’s starting to use her quickness instead of just being big.”

“She’s got an exceptionally unique body type in that she’s outrageously athletic in a six-foot-eight frame and I think for her, her skill development – both physically and mentally – is the key ingredient. She’s 19 now; if at 22 she can have a great fundamental skill set and then grow her emotional and mental skills, she’s going to be absolutely scary.” 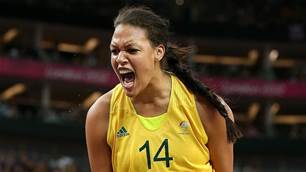 Business as usual for Milicic, Matildas and Macarthur