The Kangaroos have defeated Tonga 34-16 in a historic first Test match encounter in Auckland.

Played in front of a packed-out Mt Smart Stadium and an impressive atmosphere, Australia proved too good for the Pacific nation.

Doubles to Tom Trbojevic and Valentine Holmes sealed the win for the world champions.

Daly Cherry-Evans got the ball rolling after just six minutes.

He then set up Trobjevic for his first try, as the Kangaroos took a 12-0 lead after 10 minutes.

But Tonga hit back through Tevita Pangai Jr.

We face the Sipi Tau for the first time.#RoosTonga#GoTheRoos pic.twitter.com/8Q0LHZFXpZ

Holmes and Trobjevic were the next to score, before Daniel Tupou dived over in the 33rd minute to keep the Pacific country in touching distance.

The green and gold closed out the first half with Holmes' second try, leaving them in control with a 30-10 lead.

Tonga dominated the second half and forced dropout after dropout. Eventually they crossed through Solomone Kata.

But Australia withstood strong pressure to hold onto the lead and add a final try from fullback James Tedesco. 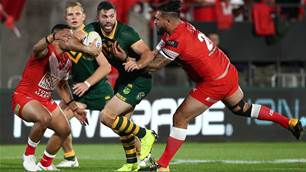