Ford’s Mustang made a perfect debut in the Supercars Championship with a pair of victories in the 2019 season opener on the streets of Adelaide.

It was also the perfect way for Scott McLaughlin to kick off his championship defence as the DJR Team Penske driver left Adelaide with maximum points after scoring two convincing wins.

“I am sure Roger (Penske) and all those people are watching at home,” McLaughlin said, “this is proud moment for our whole team. For us to win two on debut is really cool.”

For Waters, the podium result was redemption after a frustrating Saturday. Waters’ driver’s overalls cooling system suffered a failure shortly after the start of Saturday’s race, prompting the controversial decision by race officials to order him into the pits to either retire or for the problem to be rectified.

The decision was taken on a duty of care basis – on a day when temperatures topped 40 degrees, cabin temperatures in the race machines were exceeding 60 degrees.

Waters complied with order but responded angrily afterwards, saying that he could have coped with the conditions.

“It felt like redemption from yesterday,” Waters said. "It’s good to be getting a trophy again. I looked in the mirror a couple of times but I knew where I was strong. I knew I had it covered, I am just glad I got it done.”

McLaughlin heads into the second round at Albert Park in Melbourne in two weeks’ time with a handy 32-point buffer over van Gisbergen. 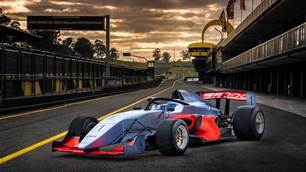 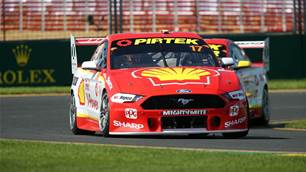