As the NBA regular season rounds the final bend and hits the home stretch, there are some teams and players where we know that what to expect from them.

Milwaukee and their MVP elect Giannis Antetokounmpo will continue to run roughshod over the league in their quest to win 70+ games. For them, the true test starts in the post season. The Los Angeles teams are in the same boat: the Lakers are set to claim the #1 seed in the West; they know that true success will be measured in playoff victories.

The Clippers are also in Championship or Bust mode, but they seemingly haven't moved out of 3rd gear all season. Will they get it together by the time the playoffs roll around, or is their current ambivalence and inconsistency a sign of what's to come? In short, can the Flip the Switch?

It's those sorts of situations that we'll examine today: the players and teams that will provide the most intriguing plot lines for the remainder of the NBA regular season.

Philadelphia paid a premium to take the one person that could slow Joel Embiid out of the equation.

At the time, Horford's four-year $109 million deal was seen as a coup for the Sixers. Even at 33 years old, Horford was seen as a key to Philly's title hopes. His defensive chops were good enough to slow Embiid, so the idea of pairing them together as a huge double team against Antetokounmpo was exciting for the Sixers faithful. To that end, the experiment has held up. The Sixers are 5th in the NBA in defensive rating, and 4th in all line-ups with Horford on the floor.

At the other end of the court, however...yuck. Philadelphia are a below average 19th in the NBA in offensive rating. They're currently scoring a mere tenth of a point per 100 possessions more than the anaemic Detroit Pistons. In theory, Horford is a floor stretching, play making big that can supplement the offense with Embiid on the floor and be a fulcrum when the Cameroonian sits.

However, 32.4% shooting from deep (on 4.4 attempts per game) has mitigated the spacing it was hoped Horford could provide. Being away from the basket has led to career lows in rebounding and blocked shots, and his declining athleticism has hindered him when chasing around the stretchier power forwards of the league.

Before the All Star break, Coach Brett Brown made a significant change in moving Horford away from the starting five for sharp shooter Furkan Korkmaz. The spacing the young Turk provides was sorely missed (Elton Brand's Kingdom for a JJ Redick), but he is of course a huge negative on defense. Brown is betting that Simmons, Embiid and Josh Richardson are good enough to cover for him.

There’s been chatter about how Horford will handle his demotion. He's a pro's pro, so you know that he’ll will do what he's asked, to the best of his ability. But is it fit, or declining capability that has resulted in the demotion in the first place? If what we're seeing is not so much Horford struggling to adapt, as much as the veteran simply struggling, then Philly's big swing has seen them strike out.

Doc Rivers has perhaps the most difficult coaching assignment in the NBA through the closing stages of the regular season. You would be well within your rights to ask why. He's in possession of the deepest list in the NBA; a roster that can shapeshift with to match up with any opponent. He has a pair of superstars, including one that is a two-time Finals MVP and arguably the best player in the NBA. He has battle-hardened vets and young tyros. How is coaching this difficult?

The answer is that in the regular season, being able to manipulate a roster like this is easy. But the Clippers are all in for the Championship. Given the contract situations of Kawhi Leonard and Paul George, the clock is ticking. The Clips need to strike now.

Come play-off time, teams generally pare things down to a solid 8 man rotation, with a 9th player getting spot minutes. For most teams, that's easy. For the Clippers? Check out this depth chart: 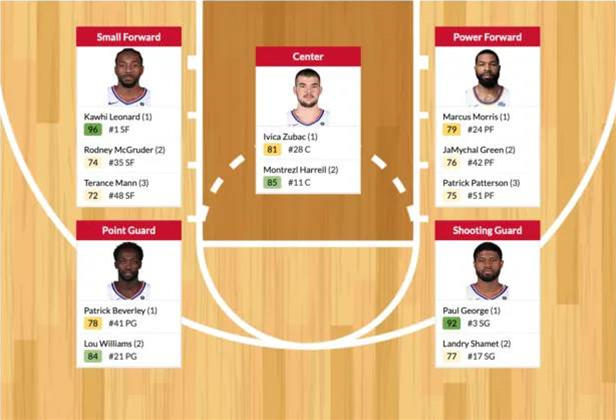 Someone is going to be missing out, here. The obvious candidate is Reggie Jackson. The recent buyout signee just doesn't fit with this team. He's a better shooter than Pat Beverley but isn't in his world as a defender. He's a better ball handler than Landry Shamet but lacks the youngster’s shooting or defensive chops. He's a better defender than Lou Williams (damning with faint praise) but isn't as good a shooter of ball handler. On this team he's nothing more than an overqualified insurance policy. Patrick Patterson and Rodney McGruder – both solid rotation players for 25 other teams - are both likely to be nothing more than victory cigars to this team, as well.

There's also the Marcus Morris conundrum. He was having a career year as The Man on a terrible Knicks team. Now, he's thrust back into a 5th option role. How does the famously headstrong Morris cope with that? How do Lou Williams and Montrezl Harrell deal with being afterthoughts in close playoff games, as Kawhi and PG monopolise the ball?

Rivers will be hoping that the chase for the Championship will keep these guys in line, because there is certainly the potential for trouble.