The Brumbies put pressure on the Waratahs' grip on top spot.

The results were mixed over the weekend for the Australian teams in round 16.

The Brumbies won a hard fought battle in the nation's capital against the Bulls. The win keeps them in the playoff race and also puts pressure on the Waratahs for the top spot in the Australian conference.

The Rebels lost a tough match away in South Africa against the Sharks by 4 points.

The Reds left the Force rooted to the foot of the ladder as Quade Cooper showed glimpses of his very best, as he tries to stake his claim for World Cup selection.

The Waratahs managed to keep their grip of the leadership in the conference but it was loosened heavily by the Lions as they got over the New South Welshmen at home in South Africa. 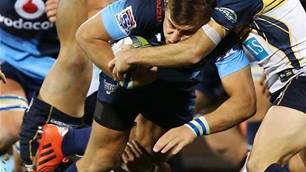 Super Rugby round 16 in pictures