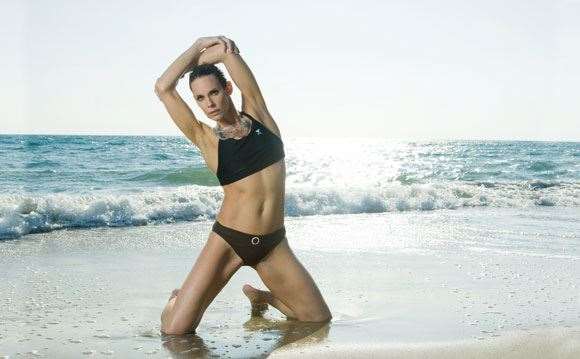 “I’m a loner when it comes to training."
Images: Pedro Virgil

By the time she’d made it on set, much to the delight of just about every red-blooded male teenage viewer the world over, she’d been slaving away for an hour in the gym – meaning she was ready for whatever the show’s directors threw her way.Since leaving the long-running smash-hit TV series and her beach-going mates like CJ Parker and Mitch Bucannon, who made up the Los Angeles County Lifeguards corp, LA-based Paul’s TV and film career (she shot six flicks in 2006 alone and has starred in several small screen series as well) has been complemented by other interests including activism (the environment, animal welfare, among many others) and sport. Yep, Paul, 46, has kept in such great shape thanks to her love of ultra-distance swimming, which she took up after knee surgery ended her running-for-fitness days.

In 1997 she attacked the Ironman Triathlon in Hawaii, finishing in 13hrs, 18mins. In ‘04 she competed in the Bonaire 10km ocean swim race. In 2006 she swam the Maui Channel Swim, a 16km course. When we caught up with her, she still held great memories of swimming from Denarau to Beachcomber Island, an 18km race in Fiji in 6hrs, 56mins in ’09. We can all learn a thing or two from “Stephanie Holden”

“It was a case of me having to take up marathon swimming. I had knee surgery in early 2004 which meant I could no longer run, so I needed to find a sport which would allow me to set myself goals without hurting myself. I really loved running – I’d done three marathons and an Ironman and some Half Ironman events. I’d been jogging for fitness since I was a teenager.“I’m not particularly competitive, so I wanted something that was more about the joy of the journey rather than how fast I could do it. I realise every athlete attacks their chosen sport with personal goals in mind, but for me there’s a real feeling of accomplishment – even if I finish last, which I do … ”

A TIME AND A PLACE

“I’m a loner when it comes to training. I can also take or leave too much racing, competitions and stuff. I prefer to train by myself and then tackle a long competitive swim every once in a while.“As an actress on location, sometimes pools or beaches are hard to find. When training for a road marathon, you can always go out running, but on location I find there aren’t many opportunities for me to train for ultra-distance swimming events. On top of that, when I swim, I get goggle marks under my eyes. If I get to the set looking like that and the marks are there for five hours, that’s not going to look good on camera! Avoiding getting sunburnt while training is another on-camera issue for me.” 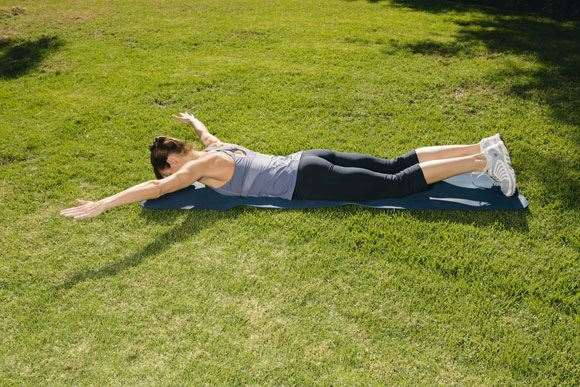 The movements strengthen the muscles around the tendons – that’s where my shoulder pain is centred.” Images: Pedro Virgil

“I start preparing for long swims three to four months out from the event. A lot of my prep exercises are shoulder rehab-based because I suffer from shoulder pain problems. In the lead-up to each swim I have to go through physical therapy (PT). I can only swim every other day. I’m planning on doing a 20km event in the kind-of near future, which means I’ll have to start my PT even earlier.“Sprint swimming work is out of the equation because it puts too much pressure on my shoulder. It’s unfortunate, as it’s important to add sprinting to any kind of swimming training regime, even if you’re doing very long distances.”

“The grass-background pics you can see are of me performing shoulder-strengthening exercises. If someone has a shoulder issue, these exercises would be on their agenda. My physical therapist put me on to them – she calls them The Six Pack. Basically one of the important things with all of them is to keep the shoulders back and to use your lats, not the small muscles in your shoulders. The movements strengthen the muscles around the tendons – that’s where my shoulder pain is centred.”

“I like to alternate between those shoulder exercises and swimming day-to-day, but as my swimming mileage increases in the lead-up to major events, that routine becomes a problem. It’s too stressful to do both. When training for a long swim, I swim well over 15km per week, then do a long swim on weekends that gradually gets longer and longer. My longest swims are about five hours in the pool. I’m completely happy handling workloads like that. I don’t know how many laps that equals, but I swim in a 25m pool. I wish I had a 50m pool in which to swim!“The longest training swim I did for the Maui Channel Swim was a four-and-a-half-hour ocean swim.” 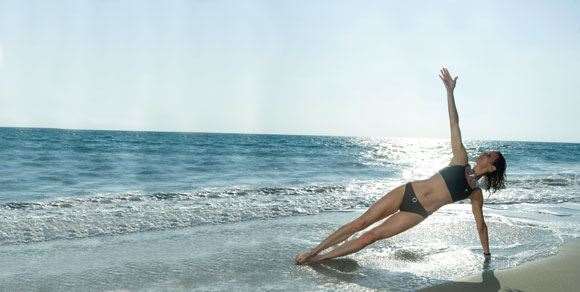 I have to work out to maintain my weight
Images: Pedro Virgil

“Incorporated into my long-distance swimming prep, immediately after the 25-minute shoulder exercise session, would be an hour of cardio in the gym, usually using the stair-stepper. I also get into lower body weights exercises – no upper body weights, just because, again, I like to protect my shoulder. The exercises with the weights aren’t swim-specific, they’re, ‘Alexandra-needs-to-keep-her-bones-strong-and-she’s-vain-specific!’”

“I’m a vegetarian. I try not to eat a lot of dairy, either. Sometimes I have protein powder to up my protein intake, and while I’m swimming I’ll have an electrolyte drink with protein powder mixed in. For fat and calories, I usually have vegan chocolate chip cookies. Normally I don’t like to eat when I work out, except if I have chocolate chip cookies on the pool deck. That ensures I get enough calories during the workout. It’s important to train with the food you’re going to use in competition. That doesn’t always work out with cookies, though. In a race once I had my first break and they passed me a chocolate chip cookie … it tasted so disgusting because the salt water brought the salt out. So I didn’t ask for any more of those and ate my back-up peanut butter bars instead! A lot of people just do liquids, but I fare better with solids – usually treats my mother didn’t let me have when I was a kid.”

“A lot of distance swimmers I’ve met and known over the years are actually former long-distance road runners who, as they’ve gotten older, have gradually found they couldn’t run as much as they used to. “A large proportion of distance swimmers are people over 50. It’s a lot lighter on the joints. It’s very likely, though, that my shoulder pain, which is sometimes in both shoulders, has to do with my swim stroke, which I’m working on.” 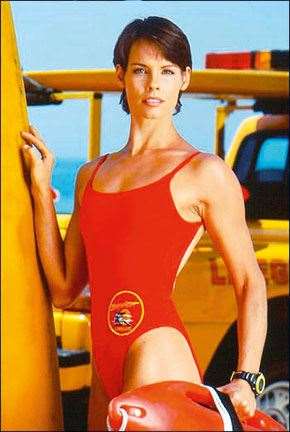 “I have friends who wear fins when they swim – they’re not competitive swimmers, but Masters swimmers, etc. It keeps pressure off their shoulders. I don’t use fins, though; I feel like I’m cheating, even though they’re supposed to be good for you. I like the simplicity of just me and my goggles.”

“I have to work out to maintain my weight – I’ve always had to. On the set of Baywatch, I would get up at 3.30am, be at the gym by 4am, do at least an hour of cardio, shower, and get to the set by six. That was every day when I was on set. I know David Hasselhoff also woke up early and worked out before the show. We were the oldest – I was 28 through to 32 and he was ten years older than me. Most of the other actors were a little younger and maybe didn’t have to train as much. We had to maintain our weight; it was in our contracts. I was told it was because of an Aussie who was cast on the show. From the time he was cast to the time he began shooting, he gained 11kg, so they put weight management into our contracts!”

“Last month I finished a film called The Frankenstein Brothers. It’s a coming-of-age comedy. I play an alcoholic mum and wife. The only part in the film that’s water-related is where I fall into a pool drunk and I need help getting out. My next project is a film in Canada called The Boy She Met Online.” 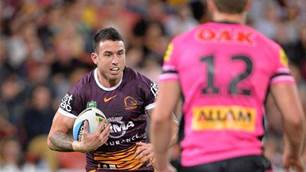